Keep an eye on this metric when Apple reports earnings on July 26.

When Apple (AAPL -2.12%) reports fiscal third-quarter financial results on July 26, analysts are expecting a painful 25% year-over-year decline in the tech giant's earnings per share. This is a particularly steep decline in EPS considering analysts are anticipating a meaningfully more modest year-over-year decline in revenue of 15.3% during the same period. The bleak outlook for Apple's earnings highlights why the stock is trading at just 11.1 times earnings at the time of this writing.

But what exactly is the key driver behind Apple's much lower EPS this quarter compared to the year-ago quarter? One major reason analysts are expecting EPS to fall faster than revenue is the company's contracting gross profit margin. 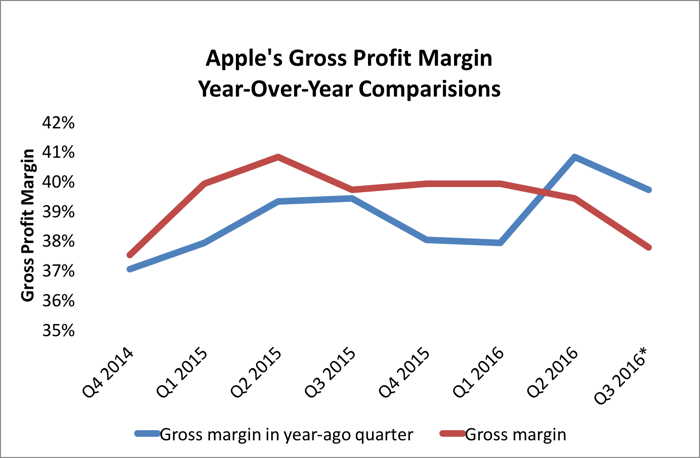 But now the same factors that were recently working for Apple's gross profit margin are now working against it. Apple's iPhone sales have turned downward and its average selling price is declining. In Apple's most recent quarter, iPhone unit sales declined 16% year over year, iPhone average selling price declined almost 3%, and the company's gross profit margin subsequently narrowed from 40.8% to 39.4%.

For Apple's third fiscal quarter of 2016, the continued trend of declining iPhone sales is expected to negatively impact the company's gross profit margin again. For Q3, management said it expects its gross profit margin to be between 37.5% and 38% -- down from 39.7% in the year-ago quarter.

It could get worse

In the near term, there's no quick solution to Apple's declining gross profit margin. Indeed, comparisons could get even worse going forward if the company keeps up with its new strategy of introducing lower-cost iPhones. In late March, Apple broke from its normal annual iPhone cycle and released its lowest-priced new iPhone ever: iPhone SE. With a starting price of $399, the smaller iPhone costs a whopping $250 less than the starting price of Apple's lowest-priced flagship iPhone 6s. If Apple continues to beef up its offerings at lower price points, this could begin to erode the company's gross profit margin even further.