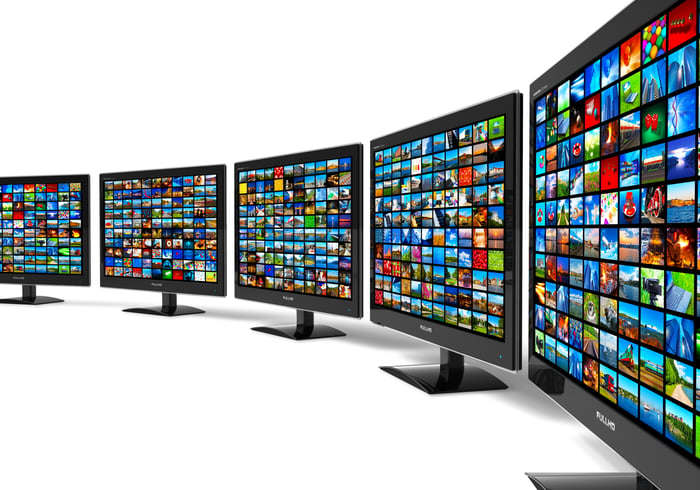 Almost 10 years ago, Apple (NASDAQ:AAPL) introduced a groundbreaking device in a new market, setting the stage for potentially skyrocketing growth over the next decade.

The device I'm talking about isn't the iPhone, which did take over the world, but the Apple TV, which launched the same year as the iPhone but missed multiple opportunities to dominate a new industry, leaving a trail of disappointments for investors along the way.

Hailed as a "DVD player for the 21st century" by then-CEO Steve Jobs, the device was truly revolutionary when it was introduced. At the time of its launch, Netflix (NASDAQ:NFLX) was just making video streaming available for its DVD-renting customers, Hulu wouldn't be born until later that year, and Amazon.com (NASDAQ:AMZN) was four years away from launching its streaming service. Cable companies were still adding subscribers, and cord-cutting had yet to enter the lexicon.

Given Apple's brand power and its head start in streaming, the iPhone maker could have been the clear leader in this industry today. Instead, it's been elbowed to the side by competitors like Alphabet (NASDAQ:GOOG) (NASDAQ:GOOGL), Amazon, and Roku.

Apple doesn't break out results from TV, instead lumping it in with its "other products" segment, that includes the Apple Watch, iPod, Beats products, and other accessories, which generated over $10 billion in revenue last year. Early in 2015, Apple said it had sold 25 million TVs over the product's history, and some analysts estimate that figure could now be as high as 37 million. With billions in revenue over its history, the product hasn't been a complete dud, but next to Apple's marquee devices like the iPhone, iPad, and Mac, those numbers aren't much more than a rounding error.

Adding to the disappointment are the many grandiose promises the company has made about TV that have gone unfulfilled. CEO Tim Cook called the recent edition "the future of TV," and Steve Jobs told biographer Walter Isaacson that he had "cracked" the problem with set-top interfaces.

Meanwhile, Apple's rivals have moved past it.

Even with solid growth from Apple TV last year, research firm Parks Associates estimated it to be fourth behind Google, Amazon, and Roku in streaming device sales last year. Of the 42 million streaming devices sold last year, Google's Chromecast was the leader, according to Strategy Analytics, with a 35% market share.

Those companies all jumped in the streaming fray after Apple, and Netflix's new deal to be included on Comcast's X1 set-top box may be a further signal of Apple TV's waning relevance. Apple VP Eddy Cue said in a recent interview that Netflix was not a competitor, but the statement alone seems to be a reflection of Apple's failure in TV. After all, why would management not see the leading video streamer the same way it views Pandora or Spotify in music?

As Apple struggles to find its footing nearly a decade after Apple TV's launch, two mistakes in particular stand out.

Missed opportunity No. 1: failure to make a smart TV

What do the iPhone, iPad, Mac, Apple Watch, and iPod all have in common?

A screen. Those are the kind of products that Apple makes: high-tech gadgets that people interact with through a screen. A smart TV would seem to be the missing member of this family, and it seems to be a mistake for a company known for its aesthetics to miss out on a chance to provide the centerpiece for your living room.

Apple spent nearly a decade researching how to make an ultra-high definition television but let go of the idea in 2014, believing it couldn't create a product compelling or innovative enough to take over the highly competitive market.

That sounds like a surprising acknowledgement of impotence from a company that's synonymous with innovation to many of its fans. Instead of making a smart TV, Apple has focused on improving its set-top box, but even as it loses share to rivals, streaming devices are being eclipsed by smart TVs, which had 120 million shipments last year compared to just 42 million for Apple TV and its ilk.

Samsung, Apple's rival and the leader in smart TVs, sold $1 billion worth of TVs in North America in a single month last year. If Samsung can bring in that kind of cash, Apple should have been able to make similar waves in the industry, and such an interactive device would have served as a platform for further innovation in a way that the box cannot.

Missed opportunity No. 2: failure to develop and sell content

Apple was ahead of the curve with its set-top device and had a content platform in iTunes to complement it. Together, the company could have built a Netflix-like ecosystem out of the two -- a video-based partner to Apple Music -- but such a project has yet to materialize, and streamers like Netflix and Amazon continue to become more entrenched.

Apple has been in negotiations with networks and content creators, but the problem is that it waited too long to develop such a service. The iPhone maker recognized the opportunity in music early on, convincing studios to sell their songs on iTunes for $0.99, but it was Netflix who seized that opportunity in video, building a streaming library at a discount before content providers realized they were getting a raw deal.

With the cable bundle on the decline and multiple bidders on the streaming side, prices for content have gone up, which is part of the reason why Netflix, Amazon, and Hulu are all turning to originals.

Apple has the customer base, the hardware, and a starting point for a content library in iTunes, but it was never able to connect the three into a viable service that kept customers in its own ecosystem.

Netflix has 83 million subscribers today, and Amazon has tens of millions on its Prime service. Apple has a box to watch them for $149 on Groupon.

That's not what investors expect from the world's leading device maker.