Royal Gold has done a great job in the precious metals streaming business, but is its portfolio too concentrated?

It's hard to argue with success, which makes it difficult to complain too much about Royal Gold's (RGLD) business. But it's worth the effort to look at what's behind the company's steadily increasing dividend payment and solid stock price. The answer is that three mines account for the lion's share of revenues. Is that too concentrated?

For income investors, Royal Gold is a standout in the often volatile precious metals industry. In fact, after 15 consecutive years of annual dividend increases, some might view this streaming company as a rock in an otherwise stormy industry. And the roughly 20% compound annual growth rate in the distribution between 2001 and 2016 is, perhaps, even more impressive -- particularly since precious metals prices have been in a funk since 2011. 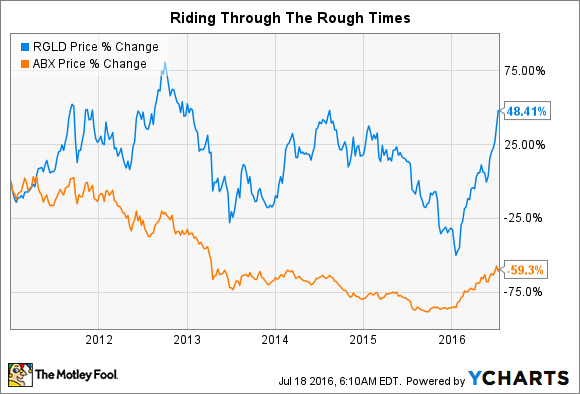 To be fair, Royal Gold's share price hasn't exactly lit the world on fire. But, if you go back to the start of 2011, Royal Gold is actually up nearly 50% after the solid rally this year. Barrick Gold (GOLD -0.47%), one of the world's largest precious metals miners, is still down nearly 60%, even after this year's rally, and Barrick's dividend has been cut several times over that span. So, in many ways, investors looking at the precious metals space should consider Royal Gold as a more stable alternative to a miner.

Focus, and a lot of it

One of the reasons Royal Gold has held up so well is that it's a streaming company. It provides miners like Barrick cash up front for the right to buy gold and silver at reduced prices in the future. So, by design, Royal Gold's costs are low. In fact, you might look at Royal Gold as a specialty finance company that gets paid in hard assets, and if you do that, the agreements it has with miners are sort of like a portfolio.

This brings up the issue of diversification. How many streaming deals are supporting Royal Gold's dividend paying ability? The answer is that one mine makes up nearly 25% of revenues. Three mines account for roughly 50% of the top line. And four mines make up about two thirds of sales. In other words, there's a lot riding on the success of a small number of mines. 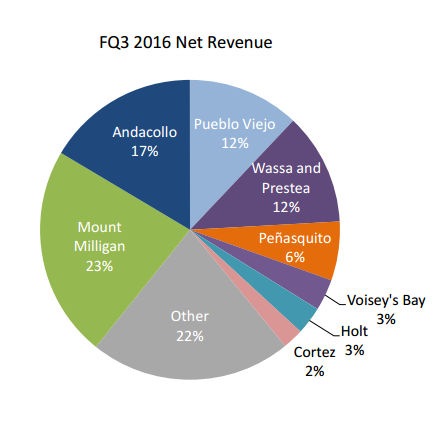 That's something to think about. While Royal Gold doesn't take on the actual risk of running mines, getting paid (in precious metals) requires the mines it invests in to be operational. For example, if Mount Milligan mine, the mine pictured at the top of the page, suddenly stopped producing because of a mining accident, environmental issues, or strike, to name just a few potential problems, about a quarter of Royal Gold's revenues would suddenly stop. Even though there's no reason that should happen, it's something you should keep in the back of your mind.

That said, this isn't such an unusual situation. For example, fellow streaming company Silver Wheaton (WPM 0.25%) gets about 22% of its precious metals revenues from a single mine. About 50% of sales is derived from three mines. And its six largest streaming deals account for roughly two-thirds of sales. Silver Wheaton is more diversified, but not by much.

Franco-Nevada (FNV -0.02%), meanwhile, gets around 55% of its streaming revenues from just four mines. The top six mines account for about two-thirds of revenues. Once again, more diversified than Royal Gold, but not materially so.

In some ways, Royal Gold's level of diversification is par for the course in the streaming business. That fact, however, isn't enough to let you nix this issue from the potential risks category. It simply means if you're going to buy a streaming company, portfolio concentration is something you need be able to handle. Moreover, while Royal Gold's long streak of dividend hikes stands out in the mining space, there's a risk that trouble at even a single mine could put that impressive record in jeopardy. This isn't a reason to avoid the stock or the sector, necessarily, but it is something to remember.