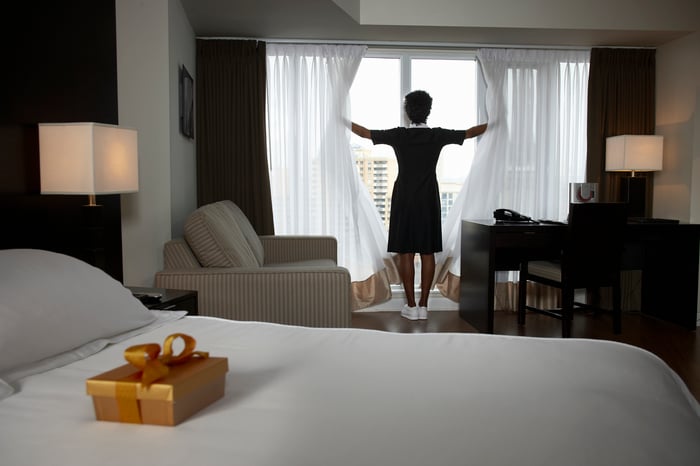 Few stocks have given investors the success that online travel giant Priceline Group (NASDAQ:BKNG) has. The company came back from the brink to become a leader in the industry, and it has moved far beyond its original gimmicky business model to become a global force that has disrupted the way people travel. However, even Priceline is vulnerable to travel trends and macroeconomic impacts, and coming into its second-quarter financial report on Aug. 4, Priceline investors wonder if they should be worried about possible future impacts from the U.K. vote to leave the European Union. Let's take an early look at Priceline Group to see if recent concerns are justified.

How will Priceline earnings fare?

In recent months, investors have dramatically reduced their expectations on Priceline earnings, cutting more than $2 per share from their second-quarter estimates and making reductions of 3% to 4% on their projections for the full 2016 and 2017 years. The stock has been volatile but is essentially unchanged from where it traded in mid-April.

The first signs of difficulty came from Priceline's first-quarter financial report, in which the online travel company posted solid gains but warned of difficulties ahead. Revenue rose 17%, and adjusted net income climbed by roughly a fourth from the year-ago quarter. Strength in gross travel bookings was strong despite currency-related pressure from the strong U.S. dollar, and Priceline's traditional strength in hotel bookings overcame more sluggish performance in the rental car and airline ticket arenas. However, Priceline projected that revenue for the second quarter would grow just 7% to 14%, and earnings guidance was between 15% and 25% below what investors had expected to see. That sent shares down 10% and set a negative tone for the quarter.

Yet the even bigger hit to Priceline came at the end of June, when British voters narrowly chose to leave the European Union. Stock markets around the world plunged, but Priceline in particular fell as much as 15% in the two days after the vote as investors apparently concluded that travel between the U.K. and Europe would somehow come to a standstill.

How Priceline got through a potential crisis

Still, the stock didn't stay down for long in either case, and the reason is simple: Priceline has weathered similar storms in the past, and the travel industry is more resilient than most investors seem to believe. Currency impacts like the plunging British pound might make U.K. citizens less able to travel abroad, but it will potentially bring a flood of foreign tourists into England, Scotland, Wales, and Northern Ireland. More broadly, participants in the financial markets seem to acknowledge that they overreacted to the event. In less than a month, U.S. stock markets were back to record highs, and Priceline had regained all of its lost ground.

Longer term, Priceline has huge opportunities. The online travel portal's investments in China are aimed at competing against Chinese rivals to tap into the fortunes of a rising middle class, and by taking an interest in Ctrip, Priceline got an easy entry point to make further inroads within the lucrative market there. By focusing on both domestic and international travel, Priceline hopes to build a competitive advantage over other U.S. online travel portals that can drive growth further.

In the Priceline earnings report, investors will want to look beyond the Brexit vote and potential impacts on Europe to assess whether the company was overly pessimistic in its guidance for the second quarter. Priceline has a history of lowballing its guidance, yet investors seem to fall for the trick again and again. It's always possible that Priceline won't be able to get over the bar it set, but investors should think twice before betting against the online travel giant finding a way to turn a big challenge into a profitable opportunity that will reward shareholders.