Apple (NASDAQ:AAPL) is scheduled to report earnings for the quarter ended in June on Tuesday, July 26, after official market hours. This report will cover the company's fiscal third quarter. Shares of the iPhone maker are under considerable pressure due to fears about decelerating growth, so the coming earnings report from Apple will be closely scrutinized by investors.

Is winter coming for Apple?

Apple stock is down roughly 20% in the last year, and this disappointing performance is mostly due to the fact that sales are moving in the wrong direction. Total revenue during the quarter ended in March amounted to $50.56 billion, a 13% decline from the same quarter in 2015.

Adding to the concerns, management is expecting revenue in the range of $41 billion to $43 billion in the June-ended quarter, which would be a 15% decline over the same period last year at the middle of the range. 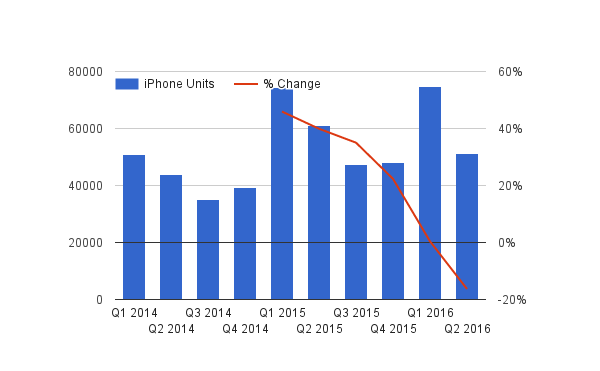 Apple generates nearly 65% of revenue from the iPhone segment, so this product is crucial for the business. Overall, growth in the smartphone industry is slowing because of increasing market penetration. In addition, the iPhone 6 was an explosive success for Apple in 2015, making year-over-year comparisons particularly challenging in 2016. The company sold 51.2 million iPhones in the March-ended quarter, a 16% decline from the same period in 2015, but still up by 17% from the corresponding period in 2014.

The good news is that the analyst bar is already quite low for Apple leading to the report. As a reaction to disappointing performance last quarter, Wall Street analysts have substantially reduced their earnings forecasts for the quarter ending in June. 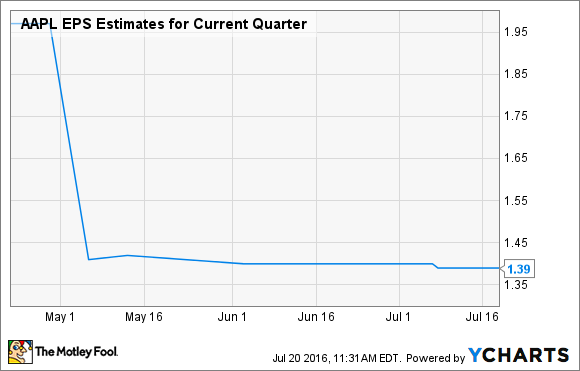 While profit margin and earnings are undeniably important elements of financial performance, revenue will most likely be a key area of focus among investors. The average sales estimate from the analysts following the company is $42.02 billion. The figure is in line with the company's guidance, and it would represent a decline of 15.3% year over year.

Since the iPhone accounts for the lion's share of revenue, sales volume and pricing in this segment is of utmost importance. The latest incarnation, the iPhone SE, was available at the stores on March 31, and Apple CEO Tim Cook said in the last earnings conference call that demand for the revamped 4-inch device was exceeding supply.

The iPhone SE is priced at cheaper levels than other iPhone models, with a starting price of $499. The product seems to be specially targeted at gaining market share in emerging markets, where income levels are lower, the carrier subsidy model is not as extensive as in the U.S., and Apple products are too expensive for many consumers.

China is becoming an increasingly important market for Apple: Sales in the country account for nearly 25% of total revenue. As the Chinese smartphone market is getting saturated, however, China's economic slowdown and currency volatility could have a considerable impact on sales figures in a particular period. Apple reported a 26% decline in revenue from the Greater China region last quarter, and this was a major drag on company-level performance.

The services segment is another particularly interesting area to watch. Apple produced $5.99 billion in revenue from this division last quarter, and the business is now bigger than both the iPad and the Mac. Services accounts for 12% of total revenue, and sales jumped 20% year over year last quarter. The services segment includes revenue from the iTunes Store, the App Store, Apple Pay, and more.

Investors would really appreciate sustained growth from this segment in the coming earnings report. Even if its quantitative impact on the overall business is still modest, it can be quite relevant from a qualitative point of view. That's because, while hardware sales are volatile and hard to predict, services tend to be recurrent and more stable.

The maturation of the smartphone market is a major headwind for Apple in terms of growth opportunities over the years ahead. With this in mind, if Apple can capitalize its massive installed user base of more than 1 billion active devices to drive sustained growth from the services business, it could see big positives in terms of future growth visibility.