The company had a very good quarter, but there are some storm clouds ahead. 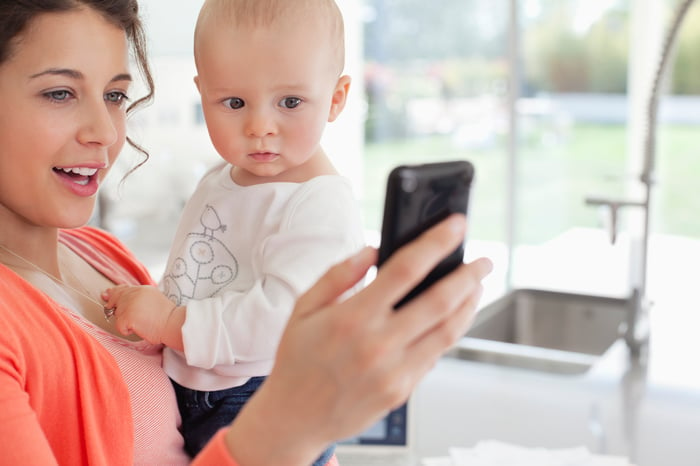 AT&T (T 2.24%) put up very solid numbers in the second quarter, but slightly under-performed when it came to analyst expectations.

The cable, wireless, and internet provider delivered adjusted earnings per share of $0.72, up from $0.70 in the previous year period but in line with expectations. Revenue however was $40.52 billion, a 22% increase, but slightly below the $40.62 billion which was expected, according to a Reuters consensus estimate.

That's a very small miss which should not distract from the fact that the company delivered a strong quarter powered by adding customers in wireless and somewhat surprisingly pay television. In that area the company gained 342,000 DirecTV customers, part of an overall gain of 38,000 global net TV adds.

Despite the fact that those numbers reflect a decline in the company's U-verse business of around 300,000 customers, CEO Randall Stephenson focused on the positive in his remarks in the earnings release.

"One year after our acquisition of DirecTV, the success of the integration has exceeded our expectations," said the CEO. "Cost synergies are ahead of target, we've added nearly 1 million DirecTV subscribers since the acquisition.

Stephenson also expressed his pleasure at the overall results for the quarter.

"Second-quarter results continued our strong track record of delivering revenue, adjusted earnings and free cash flow growth," he said. "This steady execution done at scale gives us the financial strength to grow our business while returning substantial value to our shareholders." 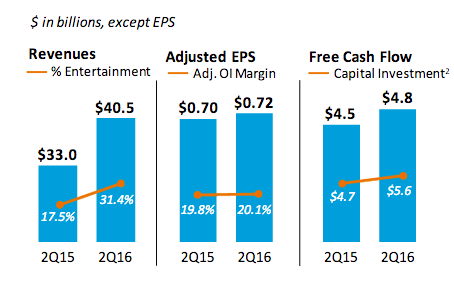 It's all about interpretation

The revenue number was solid despite the small miss, but there is some cause for concern when you dig into how AT&T achieved these results. As noted above, the company achieved pay-TV growth by adding customers at DirecTV while losing them on its pricier U-verse service.

On one hand that makes it very good that the company bought the satellite company, so it keeps some of this revenue, overall it's still a loss. The same type of thing is happening in the company's wireless business. In that space, it added 2.1 million wireless subscribers, but that was not powered by post-paid customers (the most lucrative ones). Instead it was "driven by connected devices, Mexico and Cricket."

Depending how you interpret things AT&T is either doing a great job compensating for a changing industry or its slowly bleeding away its best subscribers. In reality the answer is a little of both.

The company deserves credit for being able to manage the bottom line but investors should be concerned by the fact that consumers are leaving the company's top-tier products. The numbers are small so far, but it does show a trend in both pay television and wireless.

AT&T faces pressure in wireless from lower-cost carriers like T-Mobile (TMUS -0.82%). That competition has increased now that the difference between each carrier's network has become less relevant. Basically T-Mobile has a good-enough network with lower prices which could definitely cause more top-tier customers to leave.

In pay TV AT&T sort of serves as its own competition. Now that it owns DirecTV that service becomes more attractive to subscribers who can now bundle it with wireless service and internet access. There are worse problems than cannibalizing your own traffic, but AT&T should be concerned about the growing desire for consumers to get the most they can for the lowest price, rather than paying a premium for pretty much everything.

These are good numbers. AT&T has continually posted solid results working through these developing problems. At some point however that may change and while Q2 is reason to celebrate, there are storm clouds on the horizon -- maybe not for Q3 or even this year, but in the long-term future certainly.

Daniel Kline has no position in any stocks mentioned. The Motley Fool recommends T-Mobile US. We Fools may not all hold the same opinions, but we all believe that considering a diverse range of insights makes us better investors. The Motley Fool has a disclosure policy.