Warren Buffett has long been a fan of the insurance business at Berkshire Hathaway (NYSE:BRK.A)(NYSE:BRK.B). Managed correctly, insurers can win in two ways: by making underwriting profits and by collecting investment returns generated on investment portfolios that are sustained by their customers' premiums.

MLMIC is a mutual insurer. But Buffett's acquisition isn't just altruistic; Berkshire Hathaway is obviously buying MLMIC to make money. Thus, for the deal to go through, MLMIC will have to convert to a stock insurance company. Its policyholders will then receive a payout that MLMIC currently estimates to be roughly equal to premiums paid to the company during the 3-year period from July 2013 to July 2016.

As with any insurance acquisition, it's the intangible assets that matter most -- Berkshire values the customer relationships, with the hope that many of its customers will stay with the company after it converts to a stock insurer. According to credit ratings agency Fitch, Berkshire Hathaway's share of the market for medical professional liability insurance would jump to 18% from 13%.

Looking in the financials

Despite its status as a mutual insurer, MLMIC provides annual financial reports from which its policyholders (who are also its owners) can gauge the health of the company. Berkshire shareholders who expect these reports to look much like the consistently impressive results of its insurance units will be disappointed.

In the five-year period from 2011 to 2015, MLMIC has generated an underwriting loss, but results have generally improved over time, even as earned premiums declined. 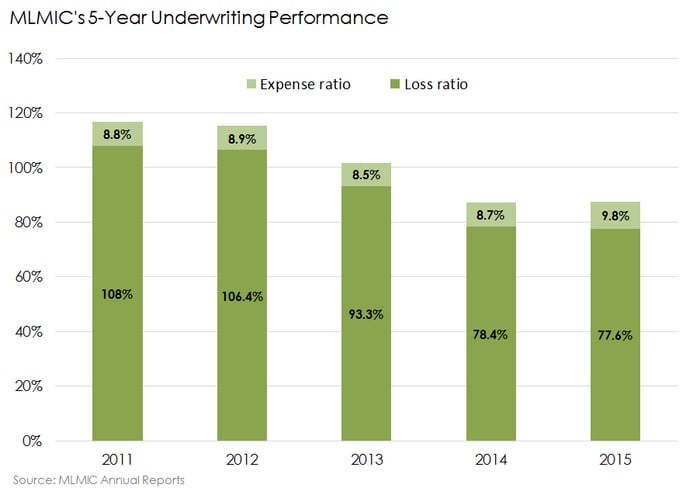 Of course, as a mutual insurer, MLMIC hasn't necessarily been optimized for profits. In a letter to its policyholders in 2014, the company noted that it reduced rates by 5% for more than half of its insured physicians and mid-level practitioners. As a stock insurer, rate decreases will likely lag declines in loss experience and be quick to jump with any increase in insurance losses.

MLMIC is a relative small fry compared to Berkshire's giants. Its earned premiums of $450 million are a mere rounding error compared to Berkshire Hathaway's earned premiums of $41.3 billion in 2015. But it will firmly cement Berkshire Hathaway as the leading insurer in yet another niche, making it more than twice the size of the second-largest medical professional liability insurer.