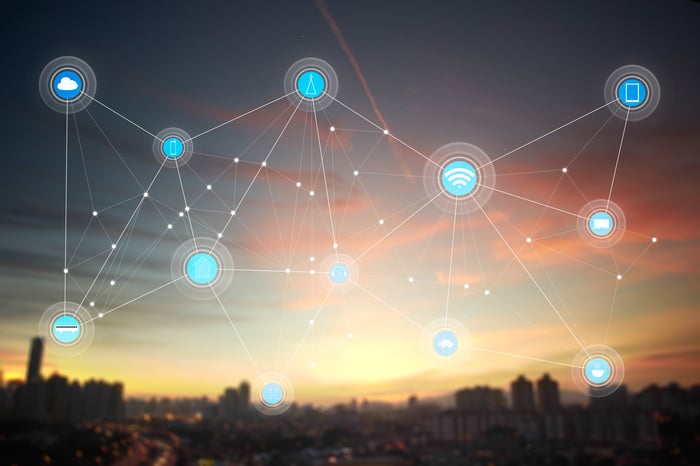 Japan-based SoftBank (OTC:SFTBF) said this week that it will spend $32 billion to acquire chip designer ARM Holdings (NASDAQ:ARMH). According to the Financial Times, it was the largest proposed takeover of a European technology company to date (ARM is based in the U.K.).

It was still a hefty sum to pay for a company that brought in $1.5 billion in revenue last year. SoftBank's investors may feel the same way -- they've pushed the stock price down about 7% since as the acquisition was announced.

But let's put that aside for just a minute, and instead focus on how ARM's growing position in the Internet of Things (IoT) could be good for SoftBank.

How ARM could usher SoftBank into the Internet of Things

ARM makes most of its money from licensing mobile chip designs to other companies, which then manufacture the chips. The company also collects royalties on chip designs.

Last year, it earned about $0.10 per chip, which isn't a whole lot, but it adds up when you consider that 15 billion chips were shipped last year with ARM processor designs. ARM hopes to take its success with mobile designs and parlay that into the growing IoT market, which is expected to be worth $7.1 trillion by 2020, according to IDC.

ARM's opportunity lies with the number of new IoT devices that are expected to come online over the next few years. BI Intelligence estimates there will be 24 billion IoT devices by 2020 (not including current devices like smartphones and tablets).

SoftBank expects ARM to remain the dominant chip designer for most of those billions of devices just as it has been for mobile devices (ARM's tech was in 95% of smartphones shipped last year).

Of course, there's no guarantee ARM will have the same success in the IoT as it has with mobile. IoT devices are expected to have lower average selling prices (ASPs) than smartphones and tablets, which could lead to even less revenue per device than ARM currently receives.

Banking on a long-term investment

SoftBank is clearly playing the long game with its purchase of ARM, but at this point, I'd have to put the acquisition in the "We'll see" category. There's no denying that the IoT will bring a lot of opportunity to ARM's chip designs, but the licensing fees and royalties could end up being much lower than for mobile.

And while there will be billions of IoT devices soon, their life expectancy is expected to be far longer than that of mobile devices because they'll be designed for very specific uses that may not change for years (i.e., a smart thermostat with an ARM-designed chip won't have the same replacement cycle as an iPhone). This means that ARM can't expect that shipments of IoT devices with its chip designs will be as high as for mobile devices.

That's why I think SoftBank is making a pretty big bet in buying ARM. It's going to take  substantial revenue growth from ARM's licensing fees and royalties for SoftBank to recoup its initial $32 billion investment. The IoT is definitely an area for investors and companies to pursue, but right now I have my doubts that SoftBank is going about it the right way.