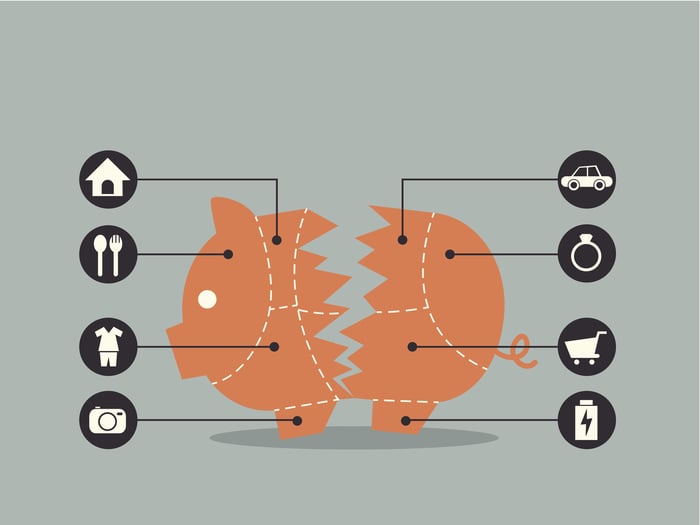 There is no reason to obsess over budgeting your money if you can instead follow a very simple rule. The 50-30-20 rule is one of the best budgeting strategies that will allow you to afford everything you need and save for your future. I'll show you how this budget works with the help of an example, Sally Saver.

Let's suppose Sally Saver is a 20-something who earns $50,000 per year in Houston, Texas. She wants to start a budget so that she can reach her retirement goals without living the life of a pauper to do it. Thus, she implements a 50-30-20 budget.

Sally knows that it's smart to pay herself first, so she starts her budget with her 401(k) plan in mind. Twenty percent of her take-home pay is roughly $8,400, which she puts in her 401(k) plan at work. Many employers offer a matching program with a 401(k). Sally's employer will match her contributions with an additional 25% invested by her employer on her behalf. Thus, her total contribution is as follows:

Assuming that she has 40 years until retirement and can earn an average annual return of 7% per year, her retirement account will eventually grow to be worth about $2.1 million. Following the 4% withdrawal rule, and assuming a 3% inflation rate, she'll have about $25,700 of inflation-adjusted annual retirement income, in addition to other income -- including Social Security, which should kick in an additional $22,000 per year in inflation-adjusted income at full retirement.

In calculating the figures above, I've assumed that neither Sally's income nor her savings increases as she advances in her career, which is probably overly conservative.

There are a few things any person needs simply to survive. Sally will need a place to live, she'll need access to transportation, and she'll obviously need to eat, too. At $21,000 per year, she has about $1,750 a month for expenses like rent, utilities, car-related expenses, and grocery shopping.

You could break that down as follows:

Of course, there is a lot of wiggle room here. Sharing an apartment with a friend would vastly reduce her rent and utilities expenditures. Food costs vary widely depending on whether she chooses to shop at Aldi or its more expensive cousin, Trader Joe's.

But the important thing here is that every extra dollar toward luxuries needs to be offset elsewhere. Sally could theoretically drive a $25,000 car, requiring a $500 per month loan payment -- but she'd have to be content living with roommates in a rough part of town.

Holding your routine monthly expenses to 50% of your budget is a very smart practice. Should Sally find herself unemployed, her emergency savings will last much longer if her needs were less than 50% of her previous salary, rather than, say, 80%.

Going out to eat, new clothes, and a top-tier cable package might be among some of Sally's more extravagant expenditures. Her budget will allow for some spending here to the tune of about $1,050 per month.

We might break down her monthly wants into the following categories:

Again, there is a lot of wiggle room in budgeting for "wants." A luxurious two-week cruise will have to come at the cost of a few meals out to eat or the sacrifice of an expensive shopping habit. But with her "wants" budget of about $1,050 per month, or roughly $35 per day, Sally certainly has plenty of room for most wants within reason.

There isn't a single budget that will fit everyone's needs. You can find a number of flaws and holes in my assumptions, as there probably isn't a single person in the United States who budgets exactly as I did. Admittedly, Sally also has an advantage in that she conveniently lives in one of just seven states that do not have personal income taxes (Texas).

One could argue that the 50-30-20 rule is too rigid, as some expenses fit in multiple categories. You might choose to allocate a $100 cellphone bill into both needs and wants, for example, as $50 for basic phone service may be a need, but the $50 per month for unlimited data to post selfies on the go is very clearly a "want" for most people. Splitting up expenses that way is more than reasonable.

Despite some limitations, the 50-30-20 rule does have some inherent advantages. The most important part is that it requires that 20% of your income go to savings. For some, that means putting money into a bank account for emergencies, or paying down student loans. For wealthier folks who already have plenty of emergency savings, the entirety of this column can flow straight into retirement investments.

In truth, the key to this budget is the 20% savings rate. If you can maintain that level of savings throughout your career, you'll have a far better retirement than most of your peers, given that the personal savings rate in the United States stood at just about 5% in 2016.