Please ensure Javascript is enabled for purposes of website accessibility
Log In Help Join The Motley Fool
Free Article Join Over 1 Million Premium Members And Get More In-Depth Stock Guidance and Research
By Sean Williams – Jul 23, 2016 at 11:41AM

Cancer is an utterly terrifying six-letter word since it's a disease that's still largely a mystery to researchers, and in many cases, there are no definitive cures. Chances are better than not that you, or someone close to you, has battled cancer, with men and women having a respective 42% and 38% chance of developing cancer during their lifetimes.

However, some types of cancer are considerably scarier than others. Although everything depends on the stage at which cancer is diagnosed, men with prostate cancer have about a 99% chance of surviving for at least five years post-diagnosis according to the 2016 Cancer Facts and Figures report from the American Cancer Society. In this respect, a cancer diagnosis, while scary, is far from a death sentence.

Still, researchers aren't sitting idly by and letting cancer proliferate at will. If you haven't been paying close attention to the latest drug breakthroughs, you'd have missed not one, two, or three... but five new lung cancer drug approvals since October.

These new therapies generally fall into one of two categories: immunotherapy or gene-specific.

Unquestionably the biggest step forward in lung cancer treatment came in the form of a label expansion for Bristol-Myers Squibb's (BMY 0.13%) Opdivo and Merck's (MRK 0.64%) Keytruda.

Currently, Opdivo is approved to treat second-line metastatic non-small cell lung cancer (NSCLC) for both squamous and non-squamous NSCLC (Opdivo received FDA approval for squamous NSCLC in March 2015 and the larger non-squamous indication in Oct. 2015). Merck's Keytruda is approved to treat second-line metastatic NSCLC in instances where patients have high levels of PD-L1 expression from their tumors. It, too, received FDA approval for this indication in October.

Opdivo's approval came after overall survival improved to an average of 12.2 months compared to the docetaxel arm, where median survival was 9.4 months. Additionally, 19% of patients treated with Opdivo exhibited a complete or partial response, with those experiencing a response having a median duration of 17 months. Comparatively, the docetaxel arm has a 12% complete or partial tumor shrinkage rate, with an average duration of just six months. Bristol-Myers is currently running dozens of additional combination studies with Opdivo with the possibility that peak annual sales could eventually top $10 billion.

As researchers learn more about why cancer forms and how it spreads, they've discovered certain genetic mutations along the way believed to lead to the formation of cancer. They've therefore spent the time to develop drugs to target these mutations. Two newly approved gene-based lung cancer therapies are Roche's (RHHBY 1.08%) Alecensa and AstraZeneca's (AZN 0.08%) Tagrisso.

The thing to know about gene-focused medicines is that they're inherently patient-pool-inhibitive. In other words, they're typically focused on only a small percentage of a diseases patient population. On the other hand, focusing on a specific genetic mutation can lead to unparalleled response rates.

For example, Roche's Alecensa is an oral therapy that targets patients with ALK-positive advanced NSCLC. This is a gene mutation found in about 5% of NSCLC patients. But the clinical results from its two studies that led to approval were phenomenal. In the first study, the overall response rate was 38% with an average duration of response of 7.5 months. The second study was even more impressive, with an overall response rate of 44% and an average duration of response of 11.2 months! Additionally, 61% of patients who also had measurable brain metastases experienced a complete or partial reduction in the size of their brain tumors. 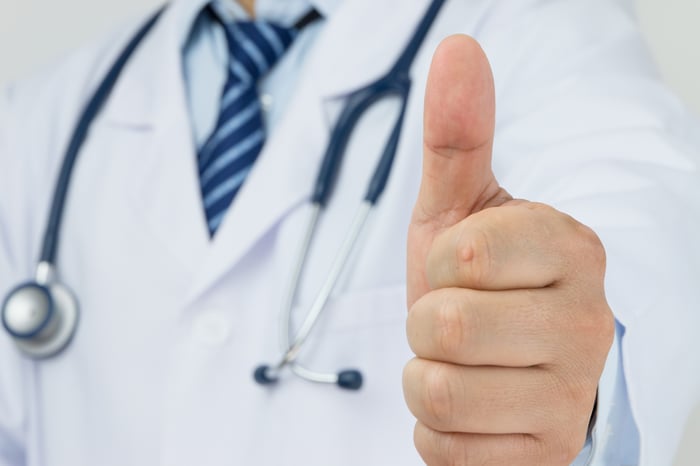 AstraZeneca's Tagrisso is another oral advanced NSCLC medication that targets a specific mutation -- in this instance, epidermal growth factor receptor (EGFR) mutation T790M. Tagrisso had some of the most impressive response rates we've seen for a cancer drug. Over two studies, 57% and 61% of T790M mutation-positive patients experienced a complete or partial reduction in their tumor size despite progressing on a prior EGFR-blocking medication.

These gene-focused therapies aren't cheap, but they've given patients with these rare mutations a much better chance of exhibiting a durable response.

Portrazza is a monoclonal antibody that's targeted at inhibiting EGFR, the aforementioned protein commonly found on squamous NSCLC tumors. In clinical studies, Lilly's Portrazza helped improve median overall survival to 11.5 months in combination with Gemzar and cisplatin as opposed to a median overall survival of 9.9 months that the placebo cisplatin and Gemzar arm produced.

The point is, we are beginning to see meaningful progress in even the toughest-to-treat cancer indications. This progress may not be of the same lightning speed with which we saw an effective hepatitis C cure produced, but it's progress in the right direction that drugmakers can be proud of.