With shares beaten down, the burrito roller has been busy repurchasing stock. Will it pay off for investors? 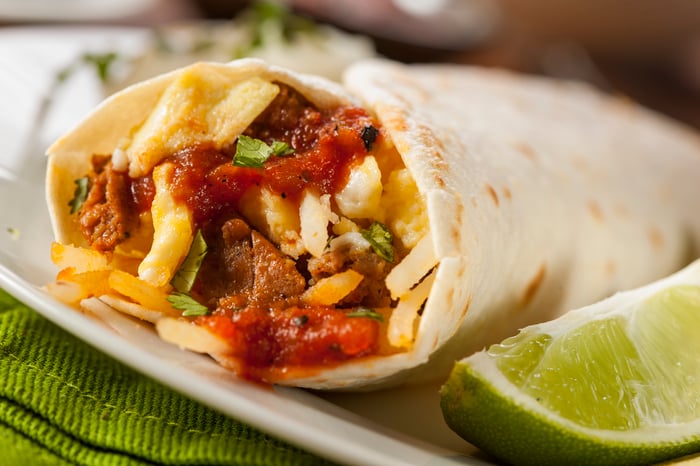 Chipotle Mexican Grill, Inc. (CMG 0.42%) stumbles through the worst year in its history, as sales have plummeted following a series of foodborne illness outbreaks, but there is at least one potential silver lining for investors.

With the stock down nearly 50% from all-time highs last year, management has been aggressively buying back shares. In May, the company added another $100 million to its share repurchase program, having already bought back more than $1 billion worth of stock over the last year. That's close to 10% of its market value -- a move that will effectively lift earnings per share by 10%. While that may sound like a solid argument for buybacks, there are reasons to question the move.

Why buybacks are controversial

Companies use share buybacks as a way of returning cash to shareholders in order to inflate earnings per share by reducing the number of shares outstanding, thereby pushing the value of the stock higher.

There are two major reasons why buybacks are criticized. First, companies might repurchase shares at elevated prices, essentially overpaying for them. Second, companies can lose focus on the underlying business by using buybacks -- a form of financial engineering -- to drive EPS growth instead of actually building sales and profits. Such a strategy depletes cash that could be used to reinvest in the business or spent on vital research and development. IBM, for example, is one company that has been criticized for spending too much on share buybacks and foregoing its core businesses, as it's seen revenue slide for several years in a row. The now-bankrupt Radio Shack also spent profligately on buybacks in the early 2000s, costing it dearly when its business later unraveled.

Why Chipotle is repurchasing shares now

The second quarter also saw aggressive share buybacks from Chipotle, with total shares outstanding declining by 553,000. The burrito roller bought back 1.243 million shares in the first quarter of this year -- about 4% of the total amount outstanding -- at an average price of $463, spending a total of $576.6 million. With the stock price down because of the fallout from the food safety problems, management believes shares are undervalued and is sending a signal that it's confident in the stock's return.

Unlike some other companies that engage in share repurchases, Chipotle has an immaculate balance sheet with no debt and $190 million in cash. The company also had $456 million in investments that it could sell to fund continuing buybacks. However, it won't be able to continue repurchasing shares at the pace of the first half of the year for much longer. Even if profits fully recover, the company would not be generating enough cash to spend $200 million or more each quarter on repurchases.

Should investors be happy with the buyback plan?

It's more important for Chipotle to bring back lost customers than to buy back stock, but just because it's repurchasing shares does not mean its attention is gone from other areas. The company hasn't skimped on marketing, for example, spending more than ever before on promotions -- including a new loyalty program -- and releasing a new short film, "A Love Story," which continues in the vein of its other promotional videos.

But spending down its entire cash balance on share buybacks would be unwise, especially as the company is set for a record number of new store openings this year, projecting between 220 and 235 new locations. Chipotle's total cash and investments balance has fallen by about half to $645 million through the first six months of the year, meaning that the pace of buybacks is likely to slow going forward. The company has $123 million remaining on its current share repurchase authorization.

Ultimately, the ends will have to justify the means for the share buybacks to be worthwhile. If management can return the company to growth and full health next year with stable profits, then investors will benefit from a 5% to 10% boost in earnings per share. However, if the company continues to struggle, then management's decision to spend more than $1 billion on stock -- rather than putting it towards restoring the business -- will look highly questionable.