Please ensure Javascript is enabled for purposes of website accessibility
Log In Help Join The Motley Fool
Free Article Join Over 1 Million Premium Members And Get More In-Depth Stock Guidance and Research
By Brian Feroldi – Jul 24, 2016 at 7:24AM

Semiconductor probe card manufacturer FormFactor (FORM 0.09%) is on deck to report results from the second quarter. The company has scheduled Tuesday, Aug, 2 as a reporting date, and results should be available after trading closes for the day.

The chart below includes what analysts expect.

The first quarter proved to be quite challenging for the company. So challenging, in fact, that management decided to pre-announce its results before the quarter even ended, stating the company was going to whiff on its previously announced revenue and gross margin guidance for the period. It even projected the company would post a quarterly loss instead of a profit.

FormFactor's actual results were right in line with its updated guidance. Revenue dropped 24% to $53.6 million, and its net loss was $6.3 million. That's a sharp reversal from the $5.9 million profit it showed in the same period a year previous.

Management attributed the huge shortfall to two main factors: First, the company's system-on-a-chip (SoC) probe cards production capabilities ramped at a much slower rate than originally projected. That caused some deliveries to be delayed, pushing them back to the second quarter. Second, the company witnessed a delay in orders for its DRAM probe card products.

At the time, management had stressed that both problems were temporary, stating that the company's backlog was at an all-time high. It even called for record output and revenue for the full year.

For the second quarter, management believes revenue will start to head in the right direction again, calling for it to land between $76 million and $80 million. Gross margins are also expected to normalize and should come in between 34% and 37%.

If both of those figures prove accurate, the company should comfortably return to profitability. Management is projecting that non-GAAP earnings per share will be between $0.10 and $0.14 for the quarter.

FormFactor's upbeat forecast appears to have put Wall Street in a good mood. Shares have risen nearly 20% since the company reported its rough first-quarter results in late April. 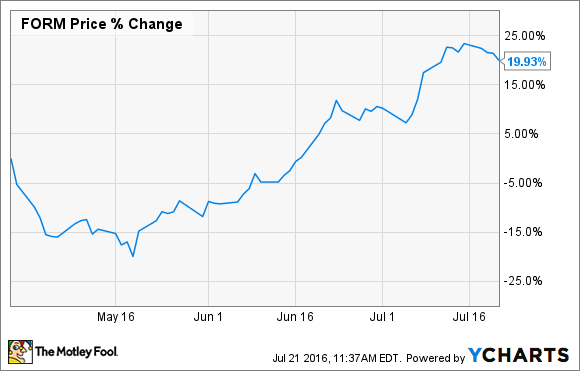 The stock's move can likely be attributed to a series of positive earning estimates revisions. Two months ago, industry watchers believed FormFactor's full-year earnings would be about $0.31 per share, but they now see that number reaching $0.38.

Growth is also expected to accelerate into 2017. Analysts are currently forecasting $0.86 in earnings per share in 2017. That's up sharply from the $0.63 they were calling for just three months ago.

One big reason for bullishness is FormFactor's just-completed $352 million acquisition of Cascade Microtech, another supplier to the semiconductor industry. The deal was announced in February, but it didn't officially close until June.

Management has promised that this deal will be transformative to the company's financial future. Revenue is expected to balloon, and the company believes at least $10 million in costs can be removed from the combined company. The deal is also projected to be immediately accretive to both free cash flow and earnings per share.

On the downside, FormFactor did have to tack on $150 million in debt to its otherwise pristine balance sheet to get the deal done. Management is aware that leverage is not good when you operate in a highly cyclical industry, and they've set a goal of reducing debt levels to below two times EBITDA within a year.

Can the company successfully execute on its ambitious growth plans? We'll get a closer look when the company reports earnings.

The Motley Fool recommends FormFactor. We Fools may not all hold the same opinions, but we all believe that considering a diverse range of insights makes us better investors. The Motley Fool has a disclosure policy.