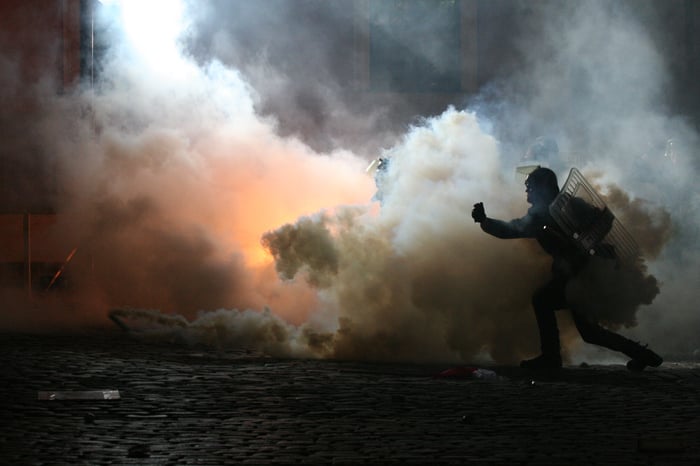 Riots, martial law, and political and social unrest, always make me hungry -- what about you? That bizarre analysis is what KeyBanc analyst Chris O'Cull gave for an upgrade and higher price target for Papa John's International Inc. (PZZA 3.30%). The new call raises the rating to overweight from sector weight, and values the pizza maker at $80 per share, the highest among all analysts surveyed by Bloomberg.

What should mom-and-pop investors make from this upgrade? When evaluating professional analyst calls, it's important to ask two major questions: Do facts, trends, and metrics support their theses? And if so, are their recommendation the best way to take advantage of their theses?

In this case, I'm afraid the answer to both questions is a resounding no. Here's why investors shouldn't count on upheaval to boost Papa John's returns.

Also noteworthy, the aforementioned figures are for total violent crime, not a per-capita figure. Since 1980, the United States population has increased by 100 million people, or more than 40%, but the incidences of violent crimes have declined. See the chart below for insight: As the second chart shows, even firearm-related police fatalities have decreased, and have been cut in half since the 1970s: This is not to say we're living in a crime-free society; but we're living in one of the safest times in American history. Additionally, this is not to dismiss the seriousness of these crimes, or dismiss concern about the recent uptick in crime -- preliminary 2015 first-half data points to a 1.7% increase in total violent crime over 2014's reported figures -- but to paint a picture of a country falling apart is more hyperbole than reality.

What has changed in the last few years is the presence of recording devices on nearly every citizen, the ability for any individual to distribute videos, and increased coverage of violent crime on both a national and an international level from an advertising-hungry media. It's the job of a skilled analyst to see through false narratives and deal in actionable data.

Even if we're heading for civil unrest, is pizza the best way to invest?

O'Cull appears to think fear has already crept its way into family meal planning. Per his research note, courtesy of Bloomberg:

After speaking with several large operators and industry contacts, we believe the recent decline in casual dining restaurant segment fundamentals -- traffic down 3-5 percent the past several weeks -- may be the result of consumers eating more at home amid the current political/social backdrop, which we believe could last through the November election.

We do not believe the consumer has 'entrenched,' but has likely shifted more in favor of convenience, benefiting pizza delivery operators like Papa John's.

Perhaps I'm unable to convince you that America is not falling apart. If you share O'Cull's view on "growing civil unrest," as Bloomberg succinctly sums up his forecast, it doesn't take an economist to tell you this is not good for commerce, broadly speaking. It's unlikely this will lead to increased pizza deliveries.

That said, there may be a few companies that will benefit from fear. Companies that focus on military and first-line responders should get an increase from this type of environment as citizens ask for more protection from their police forces. A better way to take advantage of this dark forecast would be to buy gun manufacturers, or non-lethal weapon manufacturers, like Taser International.

Papa John's tremendous growth during the last decade has been based on two specific factors. The first is the perceived quality and value of the company's pizzas.

The second, and arguably most important, has been the company's investment in digital and mobile ordering. Reducing the complications of the ordering process is a big reason for the company's growth. To be clear, I agree with O'Cull that Papa Johns is a quality investment; but I couldn't disagree more with his rationale.

If you're a long-term investor, it's also interesting to note that O'Cull expects this unrest to subside after the November election, a little over four months from now, but has increased the price target and upgraded the stock. Typically, analysts look for longer-term drivers before they take investment actions. For long-term investors, then, I'd take this analysis with a grain of salt.