The fast casual chain is a head-scratcher this year -- here's what investors need to know.

After getting off to a hot start early in the year, Zoe's Kitchen (ZOES) stock has lost steam in the past several months, despite reporting another knockout quarter in May. Why the discrepancy? And what does the Mediterranean restaurant chain need to do to push share prices higher for investors? 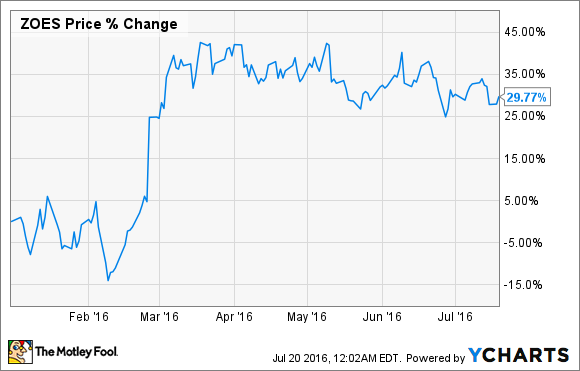 So 2015 was a big year for the company. Revenue grew 31.9% over 2014 to reach $226.6 million, and the company saw full-year profitability for the first time since becoming a public company back in the spring of 2014. Same-store restaurant sales also jumped by 6.3%, and 34 new restaurants were opened during the period.

Management guided for revenue growth as high as 24% in 2016, driven by another 34 to 36 new location openings and same-restaurant sales growth of 4% to 5.5%. When the full-year 2015 results and guidance for 2016 were released in February, the stock logged most of its year-to-date gains, jumping over 50% from February lows.

The first quarter of 2016 saw Zoe's pick up where it had left off. Revenue was up 27.6% year-over-year, as profits doubled and same-restaurant sales were up 8.1%. The company was also on track to deliver its three dozen new locations on the year with 11 openings in the first quarter and five more as of May 31. Total store count was at 182, a more than 20% increase over the 2014 base.

Due to the strong opening in 2016, management upped its guidance slightly to account for the higher-than-expected revenue and same-restaurant sales. With the company delivering such strong business growth in back-to-back quarters, why did the stock surge early in the year and shrug off the latest report?

Part of the reason is that results for the quarter, while definitely at the upper end of guidance, were largely baked into share prices already. Management raised its full-year guidance for revenue by $2 million and same-restaurant sales growth to 4.5% to 6%. With the first quarter coming in so high, a slowdown in momentum through the rest of the year is possible.

So what needs to happen to push share prices higher?

Zoe's stock will continue its confusing behavior over time as investors react to short-term business performance. Shares will trend higher in time, though, if the business continues to grow.

The company's plans for growth revolve around expanding the number of restaurants, growing the new catering business, and keeping new traffic coming in with innovation. The company plans on opening as many as 36 new locations this year, which would represent a 22% increase on top of a 26% increase in locations in 2015. Out of the 11 restaurants opened during the first quarter, two of those were in new markets.

The catering business was launched during the first half of 2015, and the company reported that growth from the segment is exceeding expectations. Part of the impressive 8.1% same-restaurant growth can be attributed to the new catering delivery system. With that in mind, though, management still feels there are efficiencies to be unlocked and more opportunities as the initiative is still in its early stages.

On the innovation front, Zoe's has an evolving menu of sorts. To keep customers coming back, and to lure new ones in, new items are added, and underperforming ones are reassessed from time to time. Over winter, four new menu options were available to diners. Expect the new food launches to continue in-line with the company's new training kitchen and food innovation center it opened last year.

More on the technical than the culinary side are planned IT upgrades, new kitchen display systems, and point-of-sale upgrades all slated for this year. The company expects these improvements to help deliver a better client experience and help boost the effectiveness of new restaurant initiatives in the future. Zoe's recipe has been working. The 30-plus new openings a year and the strong same-restaurant sales growth since 2014 is proof of that.

Owning stocks can be confusing -- sometimes even frustrating. Zoe's Kitchen investors can attest to that fact this year. Several leaps forward in business growth has equated to only one corresponding move in the underlying shares.

Rather than getting hung up on the puzzling stock performance, investors should focus on the business itself. Zoe's is turning in strong growth, and has solid prospects for continuing that growth into the future. In the short-term, shares will move all sorts of directions. Over the long-term, if Zoe's brand of Mediterranean cooking continues to win over diners, share prices will inevitably follow.

Nicholas Rossolillo has no position in any stocks mentioned. The Motley Fool owns shares of and recommends Zoe's Kitchen. We Fools may not all hold the same opinions, but we all believe that considering a diverse range of insights makes us better investors. The Motley Fool has a disclosure policy.