Looking for a way to invest in precious metals and get paid with dividends to do it? Here are three options with notable dividend upside.

Dividend growth and gold stocks may sound like a funny combination if you look at the pummeling the precious-metals industry took after the commodities bust started in 2011. But things are starting to look a little different today, and that means dividends could start heading higher. Here are three different ways to play the precious-metals rally with a dividend growth twist.

If the math works

If you're searching for a dividend-paying gold stock whose dividend could double, the first place you need to look is Newmont Mining (NEM -4.92%). Why Newmont? Well, it's one of the largest gold miners in the world. And its all-in sustaining costs are very low, averaging around $830 an ounce in the first quarter. That appears to be a roughly sustainable level, too, given the company's core of low-cost U.S. mines.

But here's the thing: Gold has recently been trading hands at around $1,325 an ounce. If Newmont's realized price is over $1,300 an ounce, the dividend is expected to be $0.05 a quarter. That's double the first-quarter disbursement. For every $100-per-ounce increase in the price of gold from $1,399 an ounce, add another $0.05 per quarter. Remember that it's based on average realized price during the previous quarter, so just because the price of gold is up over some short period doesn't mean the dividend will go up -- but if gold has a sustained rally, you should expect a dividend pop here.

The really nice thing about Newmont's dividend model is that you know, with some advance warning, what to expect. And right now, higher dividends look pretty likely.

Another dividend option on the precious-metals front is Silver Wheaton (WPM -1.72%). This is a streaming company, which means it gives miners cash up front for the right to buy gold (about 40% of revenues) and silver (60%) at reduced rates in the future. Miners use the money to build mines and, more recently, pay down debt. And Silver Wheaton gets locked-in low prices. It's a deal both sides seem to like just fine.

Silver Wheaton's dividend policy isn't as straightforward as Newmont's, but it is laid out for you to see: "The quarterly dividend per common share will be equal to 20% of the average cash generated by operating activities in the previous four quarters, divided by the company's outstanding common shares at the time the dividend is approved, all rounded to the nearest cent."

The first-quarter dividend was $0.03 a share. The second-quarter dividend will be $0.05 a share. And if gold and silver prices keep moving higher, the dividend should follow along for the ride as cash flow increases. But here's the interesting thing: While miners were struggling financially, Silver Wheaton was inking new streaming deals. In the first quarter, the company's "production" was up 24% year over year. It sold 65% more ounces of silver and gold. And cash flows were up nearly 30%.

If the silver and gold rally proves sustainable, higher dividends are pretty much baked in the cake at Silver Wheaton. That said, because the look-back period is 12 months and not the last quarter, dividend increases will probably come in a step fashion and not one big jump. 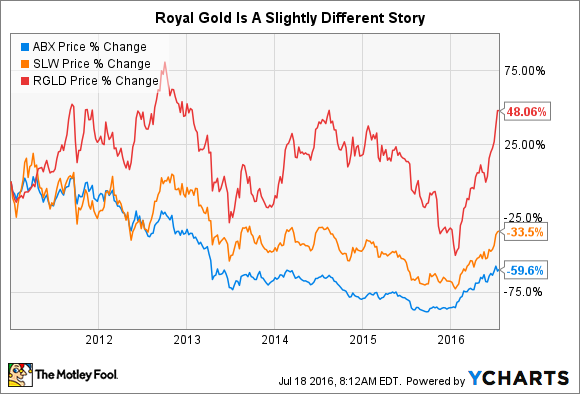 There's no formula to follow at Royal Gold. The company simply pays what it believes to be a sustainable distribution. However, over the past 15 years the compounded annual growth rate has been roughly 20%. A lot of the growth came in just a couple of years, and with falling gold prices, Royal Gold has slowed its dividend growth recently. For example, over the past five years, dividend growth averaged around 15%, and the last increase was just 5%.

However, a sustained precious-metals rally could lead to another pickup in distribution growth. To back that up, the company's fiscal third-quarter revenues were up just over 25% year over year. That's largely because, like Silver Wheaton, Royal Gold used the downturn to ink new streaming and royalty deals. To give you an idea of the growth, its "reserves" jumped by around 20% in calendar year 2015.

All of that said, you shouldn't expect Royal Gold's dividends to double overnight. It's more of a slow-and-steady-wins-the-race kind of play.

Once the commodity market started to hit the skids in 2011, so many precious-metals companies became dividend cutters that income investors may have put this sector out of their minds. Understandable, of course. But if the current gold and silver price moves prove sustainable, that could be set to change. With Silver Wheaton and Newmont, you have a way to "see" the dividend incerases before they start showing up. Royal Gold, meanwhile, is the big exception, with a long history of dividend increases and the prospect of more to come. Thus, these are three dividend-paying gold stocks whose dividends could double, each in their own way.