The engineering and design software company got back to generating new license sales growth, but still has work to do in the second half of the year.

Dassault Systemes (DASTY -0.03%) produced a decent set of second-quarter earnings and kept its full-year guidance intact, but question marks will inevitably remain on its prospects for the fourth quarter. Earlier in the year, management predicted that 2016 would see revenue and new licenses revenue growth shift to the back half of the year, and now that the company is past its second quarter, it's time to deliver. Let's take a closer look at the results and guidance to see exactly what's going on. 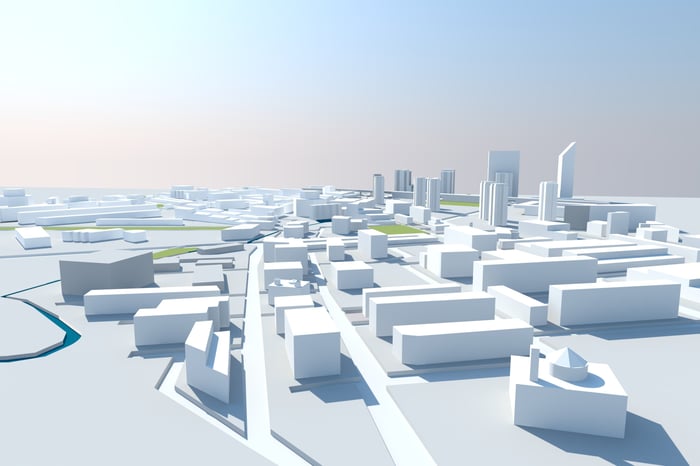 As usual with France-based companies, note that Dassault reports in euros and uses International Financial Reporting Standards (IFRS). You can think of non-IFRS in the same way that U.S. companies use non-GAAP numbers to better report underlying conditions.

Details aside, here are the key figures:

While revenue and earnings beat expectations, currency movements affect Dassault's results a lot; to put the numbers into context management even referred to the results as "at the high-end of guidance."

Turning to the all-important guidance:

On a headline level, the full-year guidance maintains prior expectations -- that's the good news -- but the company's underlying sales trends deserve closer inspection.

One key metric to follow with Dassault Systemes is new licenses sales growth.

As you can see below, new license revenue growth tends to lead other software revenue growth, an observation that explains why some investors would have been concerned by the 3% decline in new licenses in the first quarter. 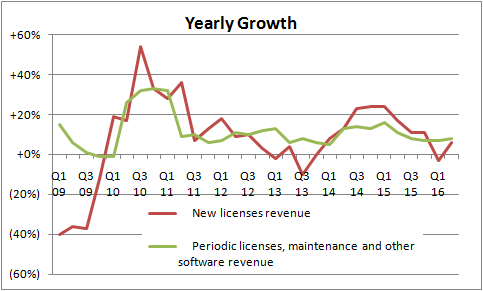 The reason why Dassault is expecting stronger growth in the second half of the year?

Essentially, management believes it's partly down to the increasing importance (in terms of revenue) of its 3DEXPERIENCE platform.The 3DEXPERIENCE solution is a platform which enables corporations to navigate and access Dassault's design software as part of a collaborative interactive environment. As such, it requires a longer adoption process; companies need to get used to how to best implement the solution -- resulting in revenue delays.

In the earnings presentation management forecasted "double-digit new licenses growth ex FX in H2," which de Tersant described as being "in line with our expectations and confirming what we have said since the start of the year."

However, readers should note that in the fourth-quarter 2015 results presentation, delivered in February, de Tersant had predicted "our financial objectives for 2016, with double-digits organic new licenses revenue growth for a third year in a row."

In a nutshell, Dassault's earnings were pretty much in line with management's expectations, and the company looks set for a stronger second half. However, investors need to keep an eye on new license revenue growth, particularly in the all-important fourth quarter.

In short, the second quarter was a decent one, but it's fair to say pressure is building on the company to deliver.

Lee Samaha has no position in any stocks mentioned. The Motley Fool recommends Dassault Systemes S.A. (ADR). We Fools may not all hold the same opinions, but we all believe that considering a diverse range of insights makes us better investors. The Motley Fool has a disclosure policy.

3 Stocks Poised for Huge Growth Over the Next Decade
363%