Please ensure Javascript is enabled for purposes of website accessibility
Log In Help Join The Motley Fool
Free Article Join Over 1 Million Premium Members And Get More In-Depth Stock Guidance and Research
By Daniel B. Kline - Jul 25, 2016 at 10:25AM

The company continues to grow sales partly by being everywhere and partly by making its ordering process as easy as possible.

What: When it comes to pizza, Americans prize convenience over quality.

That's the only way to explain why Domino's (DPZ -3.49%) continues to put up impressive sales numbers. The chain saw domestic same-stores sales grow by nearly 10% in Q2, which continued a 21-quarter streak of positive same-store sales growth. In addition the company's international division grew sames-stores sales by 7.1%, marking the 90th consecutive quarter that division has grown. 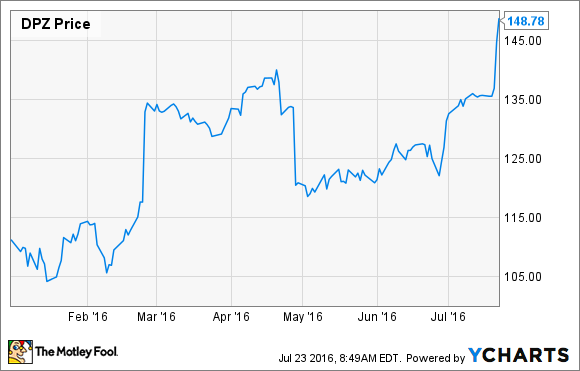 Steady sales growth has been very good for Domino's shares. After starting the year at $109.96, the company's stock price climbed to $148.78 when it closed on July 22. That's a 35% change, according to data provided by S&P Global Market Intelligence.

So what: Domino's has shown that the demand for its pizza seems to have no limits. The chain opened 244 new stores in Q2 and has added over 1,000 during the past 12 months. That's a growth pattern that hasn't slowed and shows no sign of slowing anytime soon. CEO J. Patrick Doyle seemed very happy with the numbers in his comments in the company's Q2 earnings release.

"I am pleased with our impressive top and bottom line results during the second quarter, and the performance of our franchisees in the U.S. and across the globe. The business continued to progress in a very positive direction," he said.

That's a bit of an understatement when you you consider just how unstoppable Domino's has become.

Now what: There's no reason to believe this momentum will slow down anytime soon. Domino's has focused on making the pizza experience easy for consumers while offering a good enough product that's sold at a value price.

You can now order from the chain via app, via text message, and probably by blinking in the right combination in the direction of a store. In the United States there's a Domino's close to pretty much everyone, and the couple with the easy ordering should lead to continued growth for the chain.

At some point, at least in the U.S., Domino's will saturate the market, but it's a big world that has shown a willingness to eat crummy American pizza. That's unlikely to change anytime, too, so the prospects for this stock should continue to be strong.