Please ensure Javascript is enabled for purposes of website accessibility
Log In Help Join The Motley Fool
Free Article
Join Nearly 1 Million Premium Members And Get More In-Depth Stock Guidance and Research
By Daniel B. Kline – Jul 25, 2016 at 9:05AM

The company has been locked in a power struggle and the end may be near.

Viacom (NASDAQ: VIA) has been in the news for all the wrong reasons.

The company has been dealing with major controversy as Sumner Redstone, who controls 80% of Viacom voting stock through his private National Amusements theater chain, has fought with CEO Philippe Dauman over the direction of the company. To complicate that issue, Redstone hasn't been seen in public in over a year, and there are questions as to whether he is making decisions or his daughter Shari Redstone has been pulling the strings.

What: Amid all this drama and some less-than-stellar results, shares in the company opened at $43.26 on Jan. 4 and closed at $49.70 on July 22. That's a nearly 15% increase, according to data provided by S&P Global Market Intelligence. 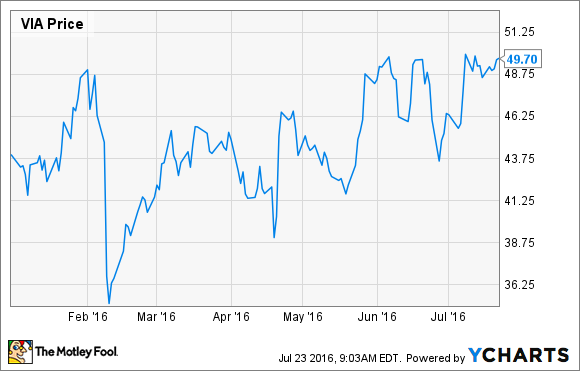 So what: It's very impressive that Viacom shares have risen when it's unclear exactly who runs the company. Sumner Redstone, or his daughter working under his name, has taken steps to remove Dauman as a trustee for the trust that controls the elder Redstone's assets should he be incapacitated. In addition, either Sumner or Shari Redstone has sought to remove the CEO from Viacom's board.

Dauman has taken legal steps to fight both removals, but ultimately he is unlikely to prevail. That's because whether Sumner Redstone is calling the shots or Shari is, eventually the family patriarch will pass on, and his daughter -- who clearly wants a change in leadership -- will take control.

Now what: The major point of divide between Dauman, along with much of the board of directors, and the Redstones is the potential sale of a stake in the company's Paramount Pictures brand. The CEO wants to explore that sale, while the family stands decidedly against it.

Dauman, for his part, has engaged in a game of chicken with the Redstones. He has pursued the sale even though he knows Sumner and/or Shari will ultimately take steps to block it, The CEO has also made moves to preserve his right to resign for just reasons, which would preserve more of his exit package than if he were to simply quit.

The market clearly sides with the Redstones. That makes sense, because Viacom has struggled in both its TV and film divisions. Going forward, it seems likely that Dauman will be replaced with a puppet willing to follow whichever Redstone is actually in charge.

Daniel Kline has no position in any stocks mentioned. He has had plenty of family business struggles, but nothing quite this intense. The Motley Fool has no position in any of the stocks mentioned. We Fools may not all hold the same opinions, but we all believe that considering a diverse range of insights makes us better investors. The Motley Fool has a disclosure policy.