Please ensure Javascript is enabled for purposes of website accessibility
Log In Help Join The Motley Fool
Free Article
Join Nearly 1 Million Premium Members And Get More In-Depth Stock Guidance and Research
By Daniel B. Kline – Jul 25, 2016 at 9:25AM

The new gaming sensation has captivated people and it shows no signs of slowing down.

Given the approval ratings for the two major presidential candidates, perhaps it's time for Pikachu to make a run for the Oval Office.

That seems far-fetched, but in July, web searches related to Pokemon Go, the augmented reality (AR) game featuring the adorable "pocket monsters," exceeded those for Donald Trump, Hillary Clinton, and Bernie Sanders combined, according to an analysis conducted by Hitwise, a division of Connexity. In fact, on July 11 -- the peak day of interest so far -- roughly one in every 63 online searches conducted in the United States mentioned the word "Pokémon."

The game, which tops both the iTunes and Google Play charts, was downloaded by an estimated 10.5 million Americans during the first two weeks of its American release, Htiwise reported.

"The most common focus of Pokémon searches has been figuring out how to play the game. With very little in the way of instruction or help -- believe me, I know -- players are more or less on their own to figure the game out," wrote Hitwise's John Fetto. "In fact, during the week of the launch, almost 10% of Pokémon-related searches included 'how,' 'guide' or 'tips.' "

The researcher also noted that searches have spiked at times for various combinations using the word "server" as players attempt to figure out why the game has at times gone down.

Who is playing Pokemon Go?

Unlike many video games, Pokemon Go has attracted a diverse audience. Over 50% of those playing are men (54%), according to Hitwise, but there are nearly 5 million women playing the game.

"Those seeking information about the game tend to be more educated, with 70% having at least some college, including a large number who are currently students," wrote Fetto.

Pokemon, a Nintendo (NTDOY -2.08%) property, makes money through Go by people making in-app purchases -- generally for no more than a few dollars. That makes the game affordable (and you can play for free), but Fetto wrote that people playing the AR game "have deeper pockets than average with those living in households with annual incomes between $50,000 and $75,000 the most likely to be in this group."

Where do Pokemon Go players go?

Because Pokemon Go gameplay forces players to move around in the real world, it can drive people to businesses. In many cases these locations serve as "Pokestops," locations where players get free goodies. A research report done by Placed, which distilled data from its double opt-in audience representing 1 in 100 adults in the United States, showed which restaurants and retailers are  most used by Pokemon Go players.

"Restaurants are in unique position to monetize the connect of digital and physical ... by Nintendo, restaurants can turn more tables throughout the day," said David Shim, founder and CEO of Placed, in a statement. "With promotions tied to lulls in activity, QSRs [quick-serve restaurants] and casual dining restaurants could immediately drive traffic into their stores during their slowest times of the day." 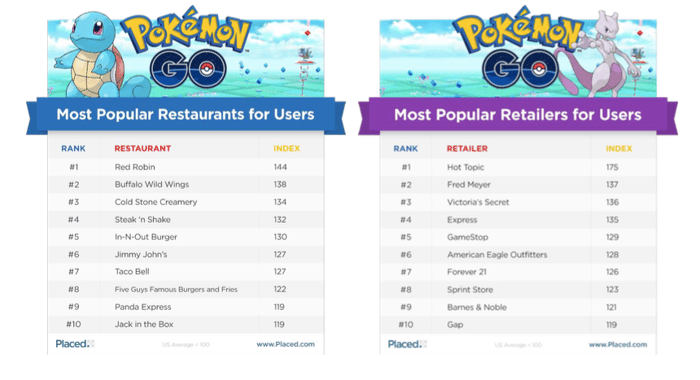 Placed's research also showed that not every business should have a Pokemon Go strategy. It noted that Food Lion, Marshall's, Home Depot, Lowe's, and CVS visitors are less likely to have the app installed.

"While Pokemon Go dominates the news cycle, data should determine the attention that it deserves in marketing strategies for retailers and restaurants," Shim said.

Is Pokemon Go a fad?

As a card game and a video game for Nintendo's handheld gaming systems, Pokemon has been around for more than 20 years. The question for its latest incarnation is whether it can remain as popular as it has become for a long period of time.

The key marketing and business aspect for the restaurants and retailers mentioned above is that currently the game can drive behavior. Currently, Pokemon Go has millions of active players swept up in the game -- people willing to drive to restaurants, malls, and stores because they are Pokestops.

Going forward, it's hard to see the game remaining as hot as it is right now. The question is whether the fad will burn out leaving Go just another fad like pogs or silly bands, or whether it will retain a long-term audience. Given the many successful Pokemon games and the steady new supply of young people playing the card game based on the adorable creatures, it's likely that Pokemon Go has a long life ahead of it.

For businesses -- and Nintendo investors -- it's important to remember that the current heat will burn out. But unlike many trendy apps of recent years, the enduring nature of the Pokemon franchise suggests that the AR game could have a very long life.

Daniel Kline has no position in any stocks mentioned. He caught a Jigglypuff. The Motley Fool owns shares of and recommends Buffalo Wild Wings. The Motley Fool recommends CVS Health and Home Depot. We Fools may not all hold the same opinions, but we all believe that considering a diverse range of insights makes us better investors. The Motley Fool has a disclosure policy.