Dan Caplinger, Jason Hall, and Timothy Green
(TMFGalagan)
Author Bio
Dan Caplinger has been a contract writer for the Motley Fool since 2006. As the Fool's Director of Investment Planning, Dan oversees much of the personal-finance and investment-planning content published daily on Fool.com. With a background as an estate-planning attorney and independent financial consultant, Dan's articles are based on more than 20 years of experience from all angles of the financial world. Follow @DanCaplinger
Follow @DanCaplinger

Investors are always optimistic that the stocks they pick will thrive and produce strong returns over the long haul. However, every investor makes mistakes, and it's important to know when it's time to move on to another attractive investment opportunity. With that in mind, three of The Motley Fool's contributors recently shared their thoughts about stocks that looked like they would be good candidates to sell. Take a look at their ideas and see if you think the same move might be smart in your portfolio.

Jason Hall: Container Store Group Inc. (NYSE:TCS) is a company I've really wanted to see do well, but it has fantastically failed as an investment. I'm almost ready to sell, but I haven't yet. Let's compare why I haven't with why I should.

Here's why I haven't sold so far:

The concept is fantastic. In our busy lives, a company that focuses on ways to better organize our spaces is awesome. As a customer, I've always had great service and good luck finding what I need (sometimes stuff I didn't even know I needed), and many others have had the same experience.

Here's why I should sell:

I've lost over 80% of my investment already. At this point, there seems to be very little reason to expect the business to suddenly appeal to millions of additional shoppers, and the company doesn't have a lot of capital resources to invest in wholesale changes. I don't think I want to own this company in a weak economy if it can't do well in a good one.

When I consider everything above, it seems clear: It's time to move on from this mediocre business. I'm selling when Foolish trading guidelines allow.

Tim Green: I sold my remaining position in graphics chip company NVIDIA (NASDAQ:NVDA) back in April because I felt the stock had risen to the point of being substantially overvalued. My timing wasn't great: NVIDIA stock has continued to rise since then, increasing another 50% or so in just a few months. 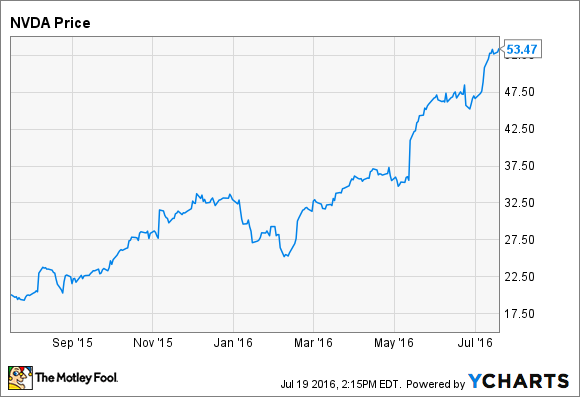 If NVIDIA was overvalued in April, it's doubly so today. At $53 per share, NVIDIA is priced for a level of growth that will be difficult for the company to achieve. NVIDIA dominates the PC graphics card market, shipping nearly 80% of discrete graphics cards in recent quarters. But further market-share gains will be tough, particularly with rival Advanced Micro Devices launching new cards this year.

NVIDIA's growth businesses, which include data center and automotive, are growing at an impressive rate. But these businesses still represent a small portion of NVIDIA's total revenue, and they'll need to grow rapidly for years to come before they start driving the company's growth. Competition in both areas will almost certainly increase, particularly in automotive, where a variety of companies are looking to stake their claim in the self-driving car of the future.

NVIDIA generated $614 million in net income last year, putting the price-to-earnings ratio at nearly 47. The company's licensing deal with Intel, which brought in $264 million last year, will stop contributing revenue after the first quarter of fiscal 2018, which ends early next year. A significant chunk of NVIDIA's profits could disappear if a new deal isn't reached. With a nosebleed valuation and the potential for a major hit to earnings next year, NVIDIA will need to put up some pretty incredible growth in order to justify its price tag. If I still owned the stock, I would sell it.

Cashing in on a closed-end fund

Dan Caplinger: I've always been a big fan of closed-end funds because you can often get discounts to net asset value for investments in stocks, bonds, and other asset classes. Yet the big plunge in bond-market yields has sent bond prices through the roof, and that has me looking hard at municipal-bond closed-end funds like Nuveen Municipal Value (NYSE:NUV).

The performance of muni closed-ends has been extremely strong, with Nuveen Municipal Value climbing almost 16% in just the past year. Much of that gain has come from the elimination of what had been a discount to net asset value, and now, the closed-end and many of its peers in the industry are trading at premiums to net asset value. When that happens, it makes more sense to look at regular open-end mutual funds, which always trade right at net asset value.

Nuveen Municipal Value trades at just a 1% premium to net asset value right now, so it isn't necessarily a pressing matter to sell immediately. But if you hold similar closed-end funds in the municipal or regular bond space, be sure to take a look and see if premiums have gotten more out of hand. If that's the case, you can reap the rewards by selling and looking for areas where discounts still prevail.