Please ensure Javascript is enabled for purposes of website accessibility
Log In Help Join The Motley Fool
Free Article Join Over 1 Million Premium Members And Get More In-Depth Stock Guidance and Research
By Tyler Crowe – Jul 26, 2016 at 11:49AM

The results from last quarter weren't great, but BP's recent results gave something that has been missing from other reports recently: Hope.

BP's (BP 0.83%) results over the past several quarters have not exactly been inspiring, but there have been some small signs of life that something good was brewing in the company. Operational costs were coming down, and we were starting to get a clearer picture of the company's production outlook. While the actual results of this quarter were no different than prior ones, this quarter showed the culmination of those small improvements into a more promising future. Let's take a look at the results for the quarter as well as why investors should be more hopeful about BPs future than they have been in recent quarters.

By the (not great) numbers

Before looking at any of BP's results for the quarter, you have to keep in mind that the company took a $5.1 billion charge related to the ongoing settlement in the Gulf of Mexico. That charge has an immense impact on the company's results for the quarter. Based on the statements from the company, this charge should bring forward the total charge for all outstanding settlements related to the spill.

BP's normalized second-quarter earnings on its American Depository Shares -- this doesn't count the Gulf spill charges -- came in at $0.23 per share, which were slightly below expectations. On a GAAP basis, though, BP fell into the loss column at ($0.46) per ADS. The company's modest normalized profits can be pretty much attributed to the increase in oil and gas prices in the quarter. It helped to narrow the losses for its upstream segment and provide a modest boost from its equity stake in Rosneft. As expected, though, that boost in oil & gas prices did have a negative impact on its downstream operations of refining and petrochemical manufacturing. Here's how BP's results break down by business segment. 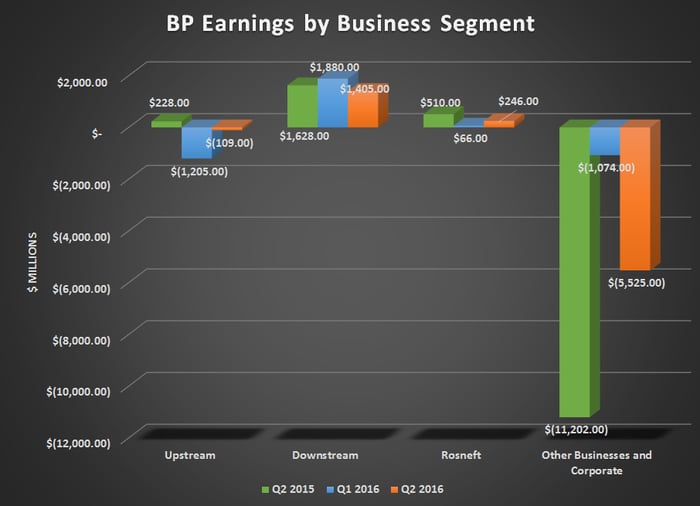 That change in oil and gas prices is a much needed change in the company's prospects. BP's average realized price on an oil equivalent basis increased from a dismal $22.57 per barrel equivalent in the first quarter to a more palatable $30.63 per boe. It's still well below what any oil producing company wants, but you could also say its slightly encouraging that the company's upstream production is pretty much at breakeven at this price range.

From an operational cash flow perspective, BP generated $3.8 billion. That number is well below the $6.2 billion it generated this time last year, but the company has also reduced its capital expenditures to $4.3 billion for the quarter, so the company is getting much closer to covering its capital spending with cash from operations than it has in the past few quarters. To cover the shortfalls in capital spending and dividend payments, BP added about $1.4 billion in long term debt and burned through about $500 million in cash. At the end of the quarter, its net debt to capital ratio stood at 24.7% with $23 billion in cash on the books.

One thing that is always concerning with a large oil company like this is that it has to generate some form of production growth, even if it's modest. This quarter, BP's production declined by 22,000 boe per day to 2.09 million boe per day. Management did note, however, that that number is down because some of its production in places like the North Sea are in the middle of maintenance season. It expects production to remain flat to modestly down in the third-quarter as well because of this maintenance work. By the end of 2017, new projects coming online and getting these assets up to full production should lead to an overall production increase of 500,000 boe per day.

One promising thing that came out of this quarter's results was that BP continued to see some success from its lubricants and petrochemical businesses. Historically, refining and fuels sales were the major driver of its downstream earnings. This quarter, though, lubricants and petrochemicals added $502 million to downstream segment's profits. Much of the gains that BP has made from these segments has been from increased sales volumes and gains from operational efficiencies, so there is some hope that the company will be able to maintain this momentum over time.

BP has approved the development of two major projects: The expansion of its Tangguh LNG in Indonesia and the development of its recent gas discovery in Egypt. Both of these projects are part of a major initiative for BP to increase its production by 800,000 barrels per day by 2010 and be cash flow breakeven -- that's capital expenditures and dividends -- at $50-$55 per barrel of oil. If it can pull that off, it will mark a huge turnaround for a company that has had some of the higher breakeven costs among its peers and a much more conservative outlook than it has taken in previous quarters.

After producing several quarters of less than impressive quarters and continued worries that the Gulf of Mexico spill had not finished taking a deep toll on results, BP is now in a position where it has drastically reduced its cash flow breakeven range and believes that this was the end of any uncertainty related to the spill. With some major projects slated to come online by the end of 2017 and some much improved results from ancillary businesses like petrochemicals and lubricants, BP is looking much better than it has as an investment in a long, long time.