Hopes for a continued rebound are high, but how optimistic should investors be?

After a massive drop from 2015 highs, Ambarella (AMBA 0.26%) stock has begun to mount a comeback. What's driving the resurgent stock, and is it sustainable? 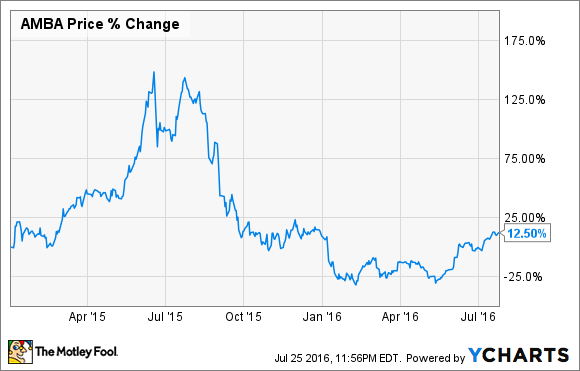 The story behind the stock price meltdown

Through the first half of 2015, Ambarella enjoyed surging revenue and profits from the increasing popularity of wearable cameras. The company's fate has been intertwined with high-definition wearable camera makers like GoPro (GPRO 1.84%) since Ambarella's video chips are the primary hardware driving many of the devices.

Ambarella's stock climbed steeply, only to be humbled in the second half of 2015 as an oversupply in wearables inventory led to decreased orders of the company's chip sets. While revenue and profit were both up for the full year ended on January 31, 2016, quarterly results have taken a hit. At last report, revenue was down 20% and profit down 90% year-over-year. 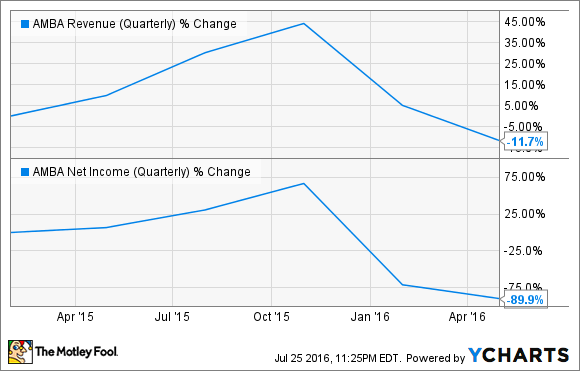 Sales have remained weak for several quarters as end-manufacturers of consumer devices burn off excess inventory. As the current spell of weakness works itself out, what has the company been doing to return to growth?

Management recognized the need to mix in business outside of the wearable device market. As a result, increased attention has been placed on other video capture and display markets, including security cameras, drones, the automotive industry, and video traffic management for municipalities.

While the company reports progress in diversifying its client base, no hard numbers are reported as far as revenue mix by industry type. In spite of efforts to change gears, continuing weakness from the wearable market is obviously still weighing down sales for the company.

This became apparent during the last earnings report, when management reported that the April 14th earthquake in Japan affected orders received from Sony (SONY 0.84%). Sony uses Ambarella's chipsets to make the video sensors that ultimately end up in wearable cameras like the ones GoPro makes. The factory that makes these sensors is estimated to be up and running again in August.

In the meantime, the slowdown from earthquake damage is weighing on the company. Ambarella CFO George Laplante stated during the last report that 40% to 45% of revenue is directly tied to orders from Sony. Efforts to diversify from the wearable tech market are clearly still ongoing for the chipmaker.

That being said, the company expects its other consumer markets to continue to pick up during the second half of the year, led primarily by drones, home security cameras, and professional security cameras in China. A little further out in the future, Ambarella also sees growing interest in 360-degree capture "virtual reality" cameras. A number of consumer companies have begun production on these new cameras using Ambarella's technological know-how.

Ambarella guided revenue down steeply again for the next quarterly report, letting investors know to expect revenue down 22% to 29% year-over-year. Demand for wearable tech remains soft, and the bulk of the Sony facility shutdown will be felt. Beyond the next quarter, though, things start to look a little brighter.

In spite of the big slump to start the new fiscal year, management sees full-year revenue finishing only 5% down to flat from last year's $316.4 million. That would imply a big rebound in sales this fall and winter to make up for the double-digit declines experienced so far.

The company sees sales picking up for GoPro and in wearable tech later in 2016. Paired with reported advances in the drone, auto, and security industries, investors could see the company return to growth as early as next year. However, there are no hard numbers to see the company's progress in diversifying, with the exception of the stated reliance on Sony for over 40% of revenue.

The worst looks to be over for now, but that will depend on consumer appetite for wearable cameras later in the year.

While the company's management projects revenue this year to be flat at best, profit guidance was eliminated in light of the Japan earthquake and the uncertainty that situation has created for the company in the short-term. Without profit guidance, it's difficult to evaluate a fair value for the stock.

That hasn't kept investors from piling in anyway. Since bottoming earlier in the spring, shares have gone up over 30% since then. Without a lot of clarity on what to expect in the way of profits from Ambarella's leadership, expect shares to continue bouncing around wildly until the situation normalizes.

Longer term, demand for wearable technology that includes video capture and display processing is expected to keep growing. As a leader in the high-definition video arena, this trend will benefit Ambarella. If the stock takes another big hit when the next quarter's numbers are released late this summer, owners of the company should be ready to scoop up more. Just be sure to moderate your expectations and fasten your seatbelt for some turbulence.

Nicholas Rossolillo has no position in any stocks mentioned. The Motley Fool owns shares of and recommends Ambarella and GoPro. We Fools may not all hold the same opinions, but we all believe that considering a diverse range of insights makes us better investors. The Motley Fool has a disclosure policy.

3 Things to Watch in the Stock Market This Week
356%