Growth will be unstable and hard to predict in the short term, but Netflix is offering tremendous potential for expansion over the coming decade.

Investing in Netflix (NFLX 1.56%) stock is not for the faint of heart. The company has delivered spectacular gains for investors in the last decade, but it's now down by 25% over the last year because of disappointing user growth. Is this just a temporary setback on the path to long-term growth, or is the Netflix growth story broken?

Netflix stock has gained over 2,400% in the last 10 years, substantially outperforming both the S&P500 and the NASDAQ over that period. But the tables have turned recently, mostly because of lower-than-expected user growth in the second quarter of 2016. 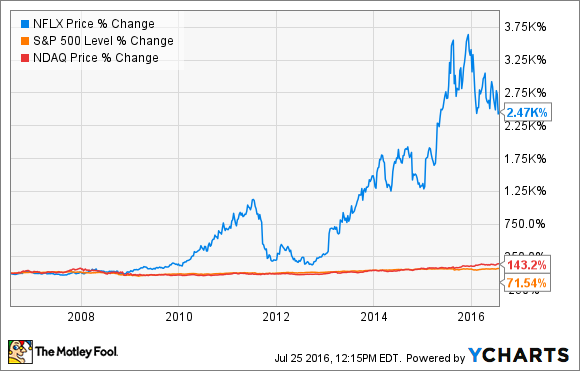 Gross additions were on target during the quarter, so Netflix is still attracting new subscribers in accordance to expectations. However, the company implemented a price increase for new subscribers two years ago, while long-tenured customers were "grandfathered" by retaining the lower price over two years. Netflix started un-grandfathering those customers in the U.S. in early April, and this produced an unexpected increase in the churn rate during the second quarter.

Netflix has a huge user base of more than 83 million members, so even a relatively small increase in churn can have a big impact on net additions during a particular quarter. Especially in the second quarter, which is seasonally weak for the company since growth tends to slow down in the summer.

The main question for investors in Netflix stock is whether this is a temporary setback or a more permanent problem. Competition in online streaming is increasing lately, with players such as CBS All Access, Seeso, Amazon Prime Video, Hulu, and YouTube Red making inroads in the industry. This is an important factor to keep in mind: If Netflix is losing market share versus the competition, the slowdown in growth could be more than just a transitory issue related to implementing the price increase in a particular period.

Management clearly explained to investors that disappointing growth during the second quarter was due to pricing as opposed to competition. To begin with, the impact from growing competitive pressure would be felt mostly on gross additions, not on churn. Besides, Netflix is experiencing a similar increase in churn rates in Canada, where competition levels are not increasing, but the company is also un-grandfathering customers.

Even after raising prices, the standard Netflix plan costs $9.99 monthly, which is broadly in line with other streaming services in the market. Besides, Netflix is stronger than ever when it comes to content, and this is a key source of competitive strength in the business. Original productions from Netflix received 54 Primetime Emmy nominations in 2016, up from 34 last year. Netflix enjoyed the largest increase in nominations among U.S. networks, and it comes in third behind FX and HBO in terms of total nominations.

Netflix and Disney (DIS -0.70%) signed an agreement in 2012 making Netflix the exclusive U.S. home for Disney films, including productions from Marvel, Lucasfilm, and Pixar released in 2016 and beyond. Netflix subscribers will have access to this content beginning in Sept. 2016, providing a considerable boost to Netflix's library of top-quality content in the coming months.

Having a long-term approach to investing can be a smart strategy to differentiate the noise from the key fundamental drivers behind an investment decision. Netflix is at the epicenter of the online streaming revolution. According to management, nearly 1 billion pay TV subscribers around the world will migrate to to internet TV over the coming decades, and chances are, Netflix will be one of the leading beneficiaries from such a tremendous growth opportunity.

Growth rates will necessarily fluctuate on a quarterly basis, and investors in Netflix need to be willing to tolerate substantial volatility. On the other hand, the company has the first-mover advantage in streaming, a powerful brand, and a valuable library of content. Netflix is well positioned to delivering strong growth over the coming decade, so the short-term dip in Netflix stock looks like a buying opportunity for investors with a long-term horizon.