Shares of Baidu (BIDU 2.74%) have taken investors on bit of a roller-coaster ride so far in 2016. By early February, shares of China's leading search engine had fallen more than 20%, as fears regarding China's slowing economy peaked. But by April, Baidu's stock had rallied sharply back into positive territory, only to plummet again in May before rallying once more and ultimately heading lower again to the price at which it stands today, roughly 13% lower on the year. 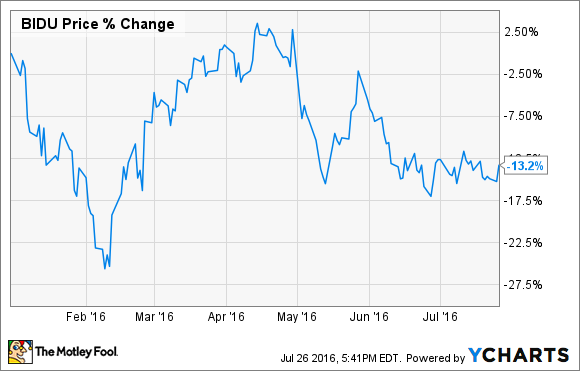 The volatility is likely to continue when Baidu reports earnings on July 28; here are some key items to watch for that are likely to determine whether the Chinese search giant's stock price climbs to new highs or plummets to fresh lows.

In June, Baidu slashed its second-quarter revenue guidance after the company was forced to modify its paid-search practices in response to the death of a cancer patient who received treatment from a medical center that he allegedly found from a sponsored listing on Baidu. Chinese regulators placed Baidu under investigation after the story went viral, and they have since implemented stricter advertising regulations for medical organizations. This, in turn, has led to a reduction in advertiser spending from Baidu's medical customers.

Baidu noted that it expects adverting spend from "high quality" medical customers to recover over time. In addition, CEO Robin Li said in a press release that, "Although a significant portion of our revenue is sacrificed, the steps we have taken to further bolster a healthy, safe and trustworthy online and offline ecosystem will result in long term benefit and reward for Baidu."

Investors will no doubt be watching to see if Baidu can meet these reduced revenue projections in the second quarter. Shareholders will also be eager to hear an update from management regarding their expectations as to the impact of these changes on Baidu's search business in the quarters ahead.

Baidu is investing heavily in its O2O, or online-to-offline, initiatives. With O20, Baidu is attempting to move from simply helping its search users find the information they need on third-party sites to a model in which Baidu directly connects its users with offline service providers such as food delivery and messenger services, thereby allowing the company to benefit more from the entire transaction. It's a lower margin business than its core search business, but in a massive market like China, Baidu's addressable market for its O2O services is enormous.

So far, investors have been relatively patient with these high-growth yet money-losing projects. But there will come a time when shareholders begin to demand profits from these initiatives, rather than just rising sales. And that time is growing closer every day.

In the second quarter, investors will be eager to get an update on Baidu's O2O business, including year-over-year growth in gross merchandise value for the company's transaction services, which surged 268% in the first quarter to $2.5 billion. GMV growth of that nature will likely be met with investor applause, while a significant deceleration in GMV growth could be a sign that Baidu's O2O projects are losing steam.

To appease less patient investors, Baidu has attempted to sell some of its unprofitable businesses. An investor group including Baidu founder and CEO Robin Li made an offer to purchase iQiyi, Baidu's majority owned video streaming site, for $2.8 billion. However, the investment group withdrew its bid after activist investors voiced concerns that the deal undervalued iQiyi.

Investors will be listening intently during Baidu's conference call for updates on this situation, as well as any comments by management regarding the company's future asset sale plans.

Baidu will announce its second-quarter financial results on Thursday, July 28, after the market closes. Investors can tune in to its live conference call, where management will discuss the quarter's results at 8 p.m. ET. Both the earnings release and a link to the conference call will be available at the company's investor relations website.

Joe Tenebruso has no position in any stocks mentioned. The Motley Fool owns shares of and recommends Baidu. We Fools may not all hold the same opinions, but we all believe that considering a diverse range of insights makes us better investors. The Motley Fool has a disclosure policy.