Please ensure Javascript is enabled for purposes of website accessibility
Log In Help Join The Motley Fool
Free Article Join Over 1 Million Premium Members And Get More In-Depth Stock Guidance and Research
By Daniel B. Kline – Jul 27, 2016 at 9:22AM

A new report shows that the biggest brands have the most trouble keeping people happy.

It does not take 140 characters to learn which company had the worst score. Image source: Twitter. Copyright Marisa Allegra Williams (@marisa) for Twitter, Inc.

A recent study of social media networks with the highest customer satisfaction offered a result very similar to some of the polls regarding the upcoming presidential election. The category of "all others" topped the biggies when it came to user satisfaction in the American Customer Satisfaction Index's E-Business Report 2016 (registration required).

It seems that in some ways at least, when it comes to social media, familiarity breeds contempt, or perhaps it's just that the smaller sites that comprised the "all others" category have yet to experience the backlash that their more established rivals have.

Overall, ACSI reported that nearly two-thirds of American adults use social networking websites and about as many turn to them as news sources. Despite those growing numbers, people are less satisfied with those services as the overall category dropped by 1.4% to 73 on the 100-point scale, making it among the dozen lowest-rated categories among the 43 industries and10 economic sectors ACSI tracks.

Still, the overall industry number is only a slight drop from 2015, which marked its highest-scoring year ever. But while "all others" showed an 11% improvement, most of the major players in the space saw their scores decline.

Which service came in last?

After a year of upheaval that included the departure of its CEO and return of founder Jack Dorsey, Twitter (TWTR) has the lowest score of any social media company rated by ACSI. The company, which even flirted with dropping its signature 140-character limit, scored a 65, dropping 8% from 71 last year.

Facebook's number was particularly dismal because it marked a 9% drop, the biggest of any rated social media brand. In addition, that fall pushed it from being just above average in 2015 to well below this year.

In some ways, the bigger brands face a tougher challenge because they serve a much wider audience. As ACSI Managing Director David VanAmburg told The Motley Fool in an email:

"The biggest social media brands like Facebook and Twitter have a hard time keeping their massive user bases happy," he wrote. "But smaller, up-and-coming social media platforms like Snapchat are able to maintain an edge of coolness while avoiding the saturation of ads that play a leading role in customer satisfaction dips elsewhere." 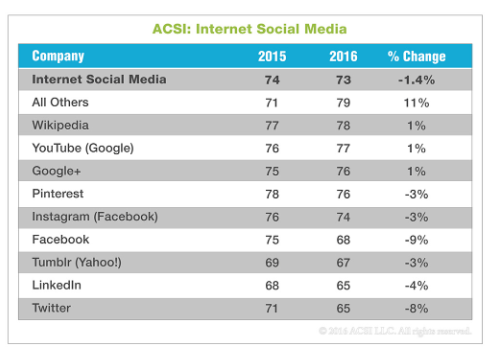 It's worth noting that top-rated social media site Wikipedia has operated in roughly the same fashion for its entire existence. The bottom-dwellers, including Twitter, LinkedIn, and Facebook, all serve substantial audiences, a percentage of whom will become angry with any change.

And, unlike Wikipedia, which is not monetized through ads, most of the poorly rated sites need to make money. For Facebook and Twitter, that means advertising. For LinkedIn, making money involves pitches for its premium services.

In some categories, a low ACSI score may be a warning klaxon for investors. That's less the case in the social media category because being not so well liked by its user base has never hurt Facebook. The same could be argued for Twitter, which has had more trouble monetizing than attracting an audience. LinkedIn is a different ballgame because it's in a specialized space, but it's bound to create some negative consumer feelings simply because people have to use it to find a job.

All of these companies should work to improve customer satisfaction, but these are not restaurants or airlines where people may simply take their business elsewhere. That could certainly happen if a social media site pushes its consumers too hard, but unhappy users are not the biggest threat to any of these services -- it's somebody building the next big thing.