While they have similar core businesses, Verizon and AT&T's recent acquisitions couldn't be more different. 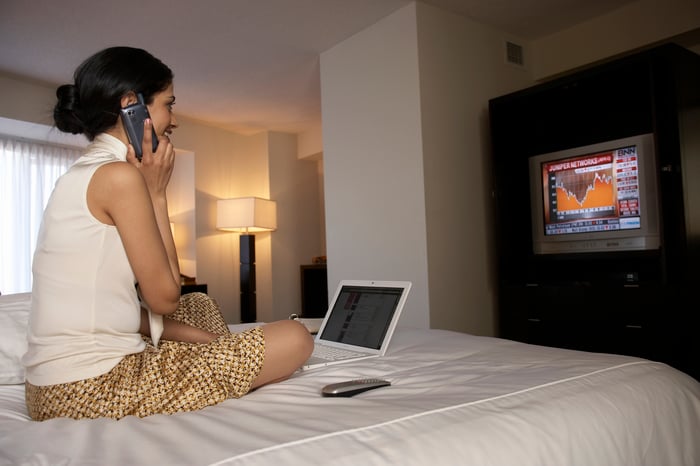 When it comes to stock comparisons, there are very few companies considered exact substitutes quite like Verizon (VZ 0.76%) and AT&T (T 0.68%). It makes sense: Verizon was formed from the Department of Justice's successful antitrust lawsuit against AT&T, both companies count wireless communications as their core business, and both are known as dependable, high-dividend-yielding companies with slowing revenue growth.

It's pretty easy to see Verizon's corporate strategy: Big Red is buying up digital companies and publishers left and right. Last year, the company purchased AOL for approximately $4.4 billion. In addition to the namesake site, Verizon also received millennial-friendly digital publishers like The Huffington Post and Engadget alongside local-media digital publisher Patch. At the time, AOL CEO Tim Armstrong described a "40-40 opportunity," a $40 billion potential market in both mobile and video.

This month, Verizon added to its digital property list by acquiring Yahoo!'s core business for $4.8 billion in cash. But don't expect this figure to break the bank for Verizon; in fact, the company paid less for Yahoo! than it paid on interest on its debt last year. Verizon appears to be taking on search giant Alphabet and social-media juggernaut Facebook in the rapidly growing digital/mobile marketing space.

On the other hand, AT&T appears to be looking to both television and the Latin American market for future growth. Last year, the company bought DirecTV for $48.5 billion, making it the largest pay-TV company in the world when added to its Uverse video service. A big reason for this is DirecTV's large presence in Latin America; in addition to the 20 million video subscribers in the United States, DirecTV also owns the majority rights to the services for 12.5 million subscribers in Latin America in addition to a large minority stake in Sky Mexico and its 7.8 million subscribers.

Both approaches have their opportunities and weaknesses. In the United States, there has been a shift in digital advertising dollars away from traditional television to digital publishing. This factor is obviously a positive for Verizon. However, the reason Verizon has been able to pick up both AOL and Yahoo! at much lower values than in years past is because there's been a shift in digital browsing behaviors away from web portals to search engines and social-media outlets.

Still, these purchases should be valuable for a company that benefits from the increase in digital ad spend through both advertising on the acquired properties and from data plans from their core smartphone business. Additionally, the synergistic effects of combining all three companies could help Verizon stock continue its gains even if digital advertising market share continues to shift to Alphabet and Facebook.

The large increase in digital and mobile marketing spend has taken place in part because of a shift in eyeballs away from television to smartphones and tablets. This shift is even more pronounced among younger millennials in the United States. For AT&T, this is a direct risk to monetizing its DirecTV acquisition. The growing trend of cord-cutters and cord-nevers may be more hype than substance at this juncture, but the growing number of U.S. households choosing to go without subscription TV bodes poorly for AT&T.

Instead, AT&T looks to be a bet on a growing middle class in Latin America with its DirecTV acquisition, which is a different strategy than Verizon's plans to be a major player in digital. AT&T and Verizon are often considered similar investments, but their recent acquisition decisions are anything but.