The company has shown solid results in its core wireless business while it attempts to diversify beyond it.

The company posted Q2 earnings of $0.94 per share, slightly beating analysts estimates of $0.94, according to CNBC. Verizon missed slightly on revenue, coming in at $30.5 billion when just under $31 billion had been expected.

"Verizon's second quarter shows that the company continues to deliver strong results while evolving operations and advancing a strategy to sustain network leadership, build new ecosystems and deliver the promise of the digital world to customers," said CEO Lowell McAdam in the earnings release.

That's an accurate statement, though much of that evolution remains in question. Clearly, Verizon is working toward remaking its business and becoming more than just a wireless, cable, and internet provider, but at least for now, those areas remain the company's core business.

Is Verizon still the wireless leader?

T-Mobile has been making inroads and gaining subscribers every quarter. It has done that by pushing the message that the two big carriers -- Verizon being one one of them -- do not have customer's interests as a key concern.

Verizon has countered that by doubling down on the the idea that it has a superior network. That's true, as it has consistently earned top honors on the biannual Rootmetrics report on the U.S. wireless industry (even though T-Mobile disputes how that study is compiled). The problem is that all wireless networks have improved, and more consumers understand the idea that while Verizon may be best, T-Mobile should be good enough.

That should cut into Verizon's business, but it hasn't yet. The company added "a net of 1.3 million postpaid connections, while stabilizing wireless service revenue declines, maintaining strong customer retention, densifying networks in major markets and advancing 5G deployment," according to the company.

Of those 1.3 million new adds, 615,000 were retail postpaid customers -- the most valuable kind. Overall, the company ended Q2 with 113.2 million retail connections, a 3.3% increase over the same period last year. Postpaid connections grew almost 4% to 107.8 million.

Wireless revenue did decline by 4% to $21.7 billion, which the company blamed on more customers choosing unsubsidized device payment plans. 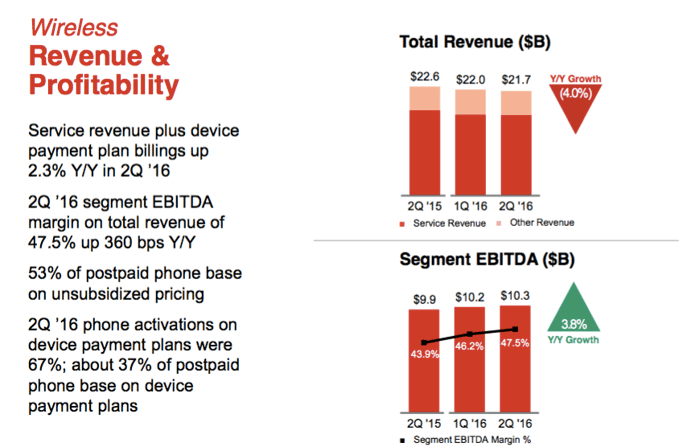 It's mostly about wireless

As recent news stories have made clear, Verizon wants to diversify, but more than two thirds of its revenue still comes from wireless. Another $2.8 billion -- about 10% of total revenue in Q2 -- came from wireline operations, its phone, internet, and cable services. Those revenues were up 3.7%.

These are generally strong numbers that show Verizon is still mostly a wireless company. That may change going forward as it now owns AOL, has its own go90 content platform, and has made extensive efforts to grow its internet of things business (which grew by 25% year over year to $205 million). And, of course, there's the elephant in the room: that the company has agreed to acquire Yahoo! for around $5 billion.

Currently, Verizon is still a wireless company that also does other things, but you can see an attempt to shift that balance, and it has so far managed the change well.

It's hard to know if that's going to work, but the company has done a solid job of protecting its core business while attempting to grow it. Going forward, T-Mobile may continue to make progress  difficult, but it does not appear that a major erosion to its wireless core will occur anytime soon.

Daniel Kline has no position in any stocks mentioned. He considers the Boston cheesesteak superior to Philadelphia's. The Motley Fool owns shares of and recommends Verizon Communications. The Motley Fool recommends T-Mobile US and Yahoo. We Fools may not all hold the same opinions, but we all believe that considering a diverse range of insights makes us better investors. The Motley Fool has a disclosure policy.