What: Shares of semiconductor equipment vendor Applied Materials (NASDAQ:AMAT) have surged 42% year to date as of market close on July 25, according to data provided by S&P Global Market Intelligence. A string of positive quarterly reports appears largely responsible for the stock's outperformance.

So what: Applied Materials stock tumbled 25% in 2015, so the jump this year has mostly just undone that decline. The stock is now trading at its highest level since the early 2000s, buoyed by strong results so far this year. 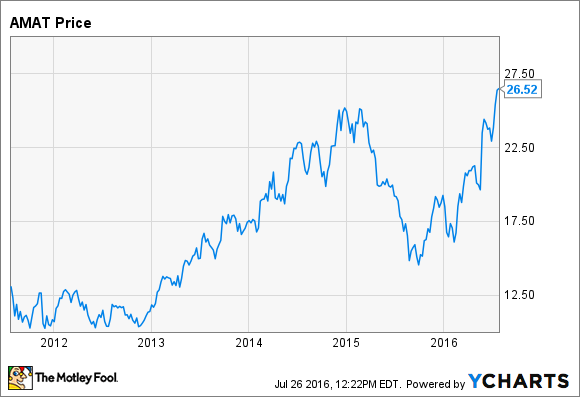 In February, Applied Materials reported its fiscal first-quarter results, beating analyst estimates across the board despite a 4.2% year-over-year revenue decline. Solid guidance from the company, which called for a 5%-10% sequential revenue increase during the second quarter, helped propel the stock higher.

In May, the company reported another better-than-expected quarter, beating analyst estimates again. This time, revenue grew slightly, up 0.4% year over year, while orders jumped 52% compared to the first quarter, marking the highest level of orders in 15 years. Orders for display products increased by nearly a factor of five compared to the prior-year period, while strong growth in flash orders counteracted weak demand for DRAM equipment.

Applied Materials' guidance for the third quarter, results for which the company will announce in August, were also well ahead of analyst expectations. The company expects revenue to increase sequentially by 14%-18%, far higher than the 2% growth rate analysts expected.

Now what: Applied Materials operates in a cyclical industry, with orders and revenue fluctuating significantly depending on demand. Demand returned in a big way during the second quarter, particularly in the display and flash segments, and these orders will help drive revenue and earnings growth for the rest of the year. Investors are betting that the company's strong performance in recent quarters will continue.