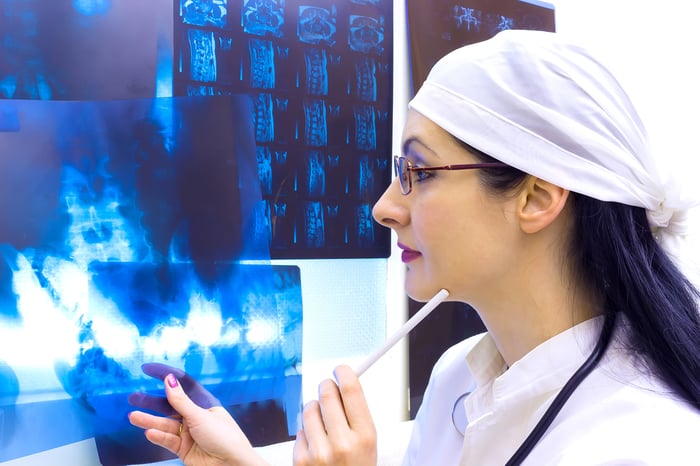 What: After reporting single digit top-line revenue growth in the second quarter that was shy of industry watchers' forecast, shares in Globus Medical (GMED 1.27%) tumbled by 15% as of 3:30 p.m. Wednesday.

So What: In the earnings report it released Tuesday after the close, the maker of musculoskeletal spinal implants to promote healing said that sales grew 2.9% year over year to $137.5 million in the second quarter, leading to EPS of $0.29.

Revenue grew roughly in line with the broader spine care market, and earnings growth of 10.6% increased more quickly than revenue growth thanks to rising volume being leveraged against fixed costs. Cost of goods sold dipped to 23.9% in the quarter from 24.4% a year ago. Selling, general, and administrative expenses improved to 38.1% of sales from 40.8% last year.

Globus earns the vast majority of its revenue in the U.S., but sales internationally grew more quickly than they did domestically. International sales improved 5.7% to $12.8 million in the quarter compared to a year ago.

Now What: The company's plans include further increases in its sales team to help drive growth. Management updated guidance for this year to $575 million in sales and non-GAAP EPS of $1.20. Heading into Wednesday, industry watchers were hoping for revenue of $583 million this year. Globus also offered its first forecast for 2017. Management is targeting full year sales of $640 million, including $40 million from acquisitions.

Globus has a solid balance sheet with no debt, and plenty of cash on the books, but with a forward P/E of 18.8, its stock isn't a bargain, especially given the company's low-single-digit growth. Overall, there are probably other investment ideas that are more compelling for investors to consider buying.