Despite a solid second quarter and management raising full-year guidance, shares of FCA are heading lower and here's why.

Fiat Chrysler Automobiles (FCAU) investors should have been all too happy to brush off the negative headlines surrounding the automaker's inflated sales reporting and embrace what was a solid second quarter. That wasn't the case, however. Let's dig into the overall numbers, a handful of highlights, and some looming hurdles the automaker is facing.

Starting with the top-line results, FCA's net revenue was down 2% during the second quarter on 1% fewer shipments. However, despite the top-line decline, the company checked in with a strong bottom-line result. Adjusted EBIT jumped 16% higher to 1.63 billion euros, compared to the prior year, with margins increasing from 4.9% during 2015's second quarter to 5.8%. Equally impressive was the rise in adjusted net profit, from 372 million euros to 709 million euros.

It wasn't just a solid quarter based on the raw financial data, either. Moody's raised FCA's corporate credit rating from B1 to Ba3, and said its outlook for that rating was stable. Furthermore, the strong first quarter enabled FCA management to move estimates upward: Net revenues are now expected to check in at more than 112 billion euros, up from the previous forecast of 110 billion euros, for the full year. Adjusted EBIT was raised to more than 5.5 billion euros from 5 billion euros and adjusted net profit was raised from 1.9 billion euros to 2 billion euros.

It's clear looking at the figures that a favorable product mix is driving the stronger results for FCA. Essentially, that means Jeep and Ram are fueling stronger margins and thus the improved bottom line. You can see how much of an impact Jeep and Ram -- which posted sales gains of 12% and 10% during the second quarter, respectively -- are having on FCA's NAFTA business segment. 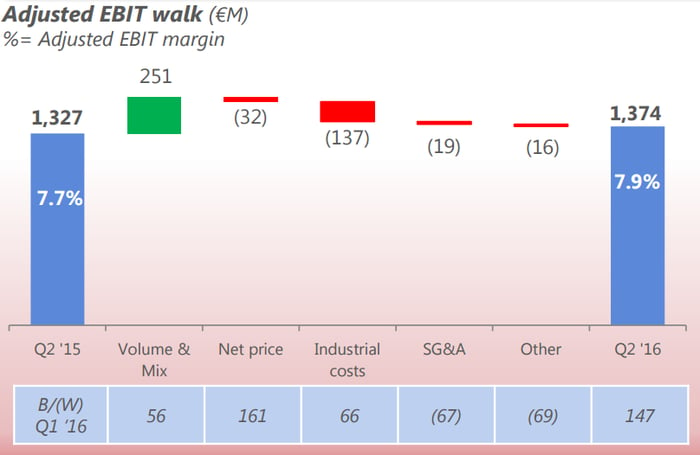 However, FCA still has some improving to do if it wants to bring its results closer to those of its competitors. For instance, while FCA's margin moved higher to 7.9% in its NAFTA region, that fell quite a bit short of the very strong 12.1% margin General Motors achieved in its North America region during the second quarter.

One thing for investors to keep an eye on will be how much traction Jeep gains in China. The company believes its goal of 500,000 annual Jeep sales in China is achievable by 2018. If FCA can do that, it would be a big boost for its bottom line; consider that 500,000 sales in China would be in the ballpark of about half of its U.S. sales.

FCA will cease producing the Dodge Dart or Chrysler 200 in the U.S. by the first quarter of next year, and will instead use the production capacity to churn out more profitable Ram and Jeep vehicles. The question is what happens if it can't find a partner to produce those vehicles? FCA CEO Sergio Marchionne said the company has made progress to secure a partner, but nothing is in place to warrant an announcement.

It's an important decision, as the switch in production from the Dart and 200 to more profitable SUV and trucks will boost the company's NAFTA margins closer to those of its Detroit competitors. However, that margin expansion could be partially offset if the ultimate partner for the cars' future production isn't ideal. For instance, if FCA's only option is having a production partner in China, it could end up being more costly to ship those vehicles back overseas to sell in the U.S. market than if it can find a production partner located in Mexico.

Why shares are declining

Ultimately, this was a solid second quarter for FCA, with its margins improving, debt rating being upgraded, and full-year estimates moved higher. That said, some FCA investors are growing pessimistic about the company's prospects. One glaring concern is that the company has yet to prove that, if consumer purchasing trends away from SUVs and trucks, which it excels at producing, it can generate enough passenger car sales at healthy profit levels.

Another huge factor is that, despite the company having reduced net debt levels during the second quarter, it still has an elevated level of debt compared to its competitors. Consider that FCA's total debt is just over 25 billion euros, or about $27 billion, while General Motors' automotive debt sits at just under $11 billion. The elevated debt remains an issue because this could be the top end of the cycle after years of sales expansion in the U.S. market, and if it hasn't been able to pay down its debt substantially when the market for highly profitable vehicles has been red hot, it's concerning that FCA would be able to do so going forward.

Despite the second quarter being a step in the right direction, investors aren't optimistic about the company's stock beating the market in light of those looming concerns.