These three companies are selling on the cheap, but I'd still suggest that investors stay away.

Most investors who buy individual stocks do so in an attempt to beat the market. One common strategy that they employ is to buy companies that are selling on the cheap. The theory goes that putting money to work in companies that are temporarily out of favor puts the odds of success on your side.

While I'm a believer in buying strong companies that are in out-of-favor sectors, I also recognize that a temporary downturn in a stock's price doesn't make it an automatic buy. After all, one way that the market signals that a company's future is in jeopardy is by knocking down its valuation. If the the company then fails to execute, its stock can still turn into a terrible investment, even if you can get it for a "cheap" price.

With that in mind, below is a list of three stocks that are very cheap right now but, I think, could still lose their investors a lot of money.

A decade ago, personal computer sales were booming, which was a huge tailwind to every major player in the industry. More recently, consumers have shifted their buying habits away from traditional PCs and have instead come to favor mobile devices like smartphones and tablets. That change has pressured unit volumes and is a big reason why global sales of PCs have fallen in each of the last four years.

In prior years, companies like HP (HPQ 0.80%) could always bank on new versions of Microsoft Windows being launched to help spur demand, but that's no longer the case. Microsoft is now providing free software upgrades to the latest versions of Windows, which has eliminated the need for a hardware upgrade.

Last quarter's results show what a tough position HP is in right now. Total revenue declined by 11% as the company showed weakness is all of its major segments. While aggressive cost-cutting and share repurchases did help boost its bottom line, it's hard to view either of those measures as sustainable.

Given all of the above, it's hard to be bullish on HP's future, which is why the company is currently selling on the cheap. Shares can be purchased for about seven times earnings, and dividend yield has been pushed up to 3.5%. While that's a low price, this company's growth prospects look quite bleak, so I for one plan on keeping far away.

Retailers of every shape and size have been struggling to grow recently, and there's no doubt that e-commerce players like Amazon and Wayfair are a major reason why. Each year, more and more consumer spending is shifted online, and brick-and-mortar retailers like Bed Bath & Beyond (BBBY -2.70%) are having a hard time fighting the trend.

Last quarter, sales at Bed Bath & Beyond were flat year over year. That doesn't sound like such a bad result given the overall retail environment, but to maintain that level of sales the company had to lower its prices. So even though sales were roughly flat, net earnings actually dropped by a 23% when compared to the year-ago period.

If you zoom out a bit, you can see that the company has been losing its pricing power for several years, which has not helped its profitability. 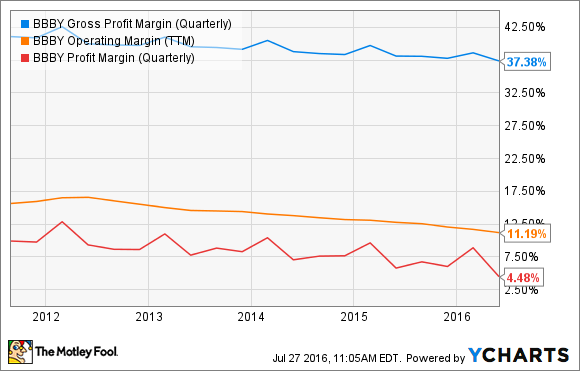 The company's sales figure also paints a troubling picture. While reported same-store sales declined by only 0.5%, that result includes a 20% increase in online sales. If you remove that sales bump, you'll see that Bed Bath & Beyond's retail stores actually posted a much steeper decline in comp sales.

The markets know that Bed Bath & Beyond won't be able to reverse its fortunes any time soon, which is why shares can be purchased for less than nine times trailing earnings. That's quite cheap, but since I think that the lower margins are here to stay, I have a hard time seeing how this company can get out of its current funk.

Western Union (WU 0.78%) traces its roots all the way back to 1851, and for decades this company was the go-to place if you wanted to transfer money. The company's enormous worldwide network of money-transfer locations gave it a huge leg up over competitors. In turn, the company boasted strong pricing power and its stock flourished for years.

However, technological advancements have made it far easier and cheaper for consumers to send money, which has put a lot of pressure on Western Union's business model. Nowadays consumers can even turn to simple smartphone apps, like PayPal's Xoom, to quickly and cheaply send money all over the world. That extreme convenience is removing the need to visit a Western Union location.

With more alternatives available, Western Union has struggled mightily to grow its top line, and it's being forced to give in on pricing in order to simply retain its customer base. That's digging into its profitability to a great extent, which is why the company's net income has been heading in the wrong direction over the past few years. 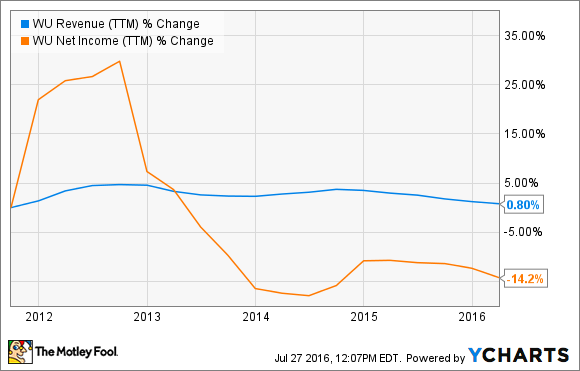 On the plus side, Western Union has a debt-free balance sheet that is packed with cash, and its business still spits out copious amounts of free cash flow. Still, with the company's business model under assault, I think that its top line is going to be stuck in the mud. So even with shares trading for about 12 times next year's earnings, it's hard for me to believe that Western Union's stock will be a good investment.

Recent history suggests that you should stay away

Perhaps unsurprisingly, all of these companies have drastically underperformed the S&P 500 over the past five years. 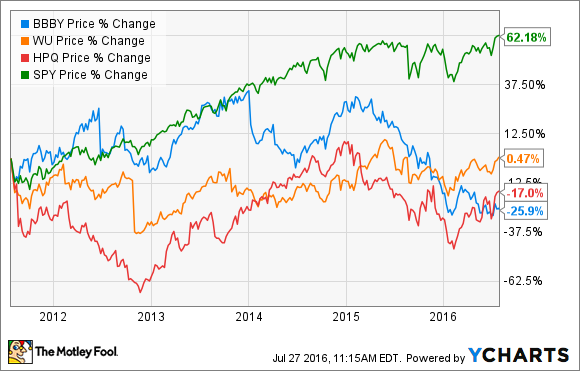 With huge question marks in the air related to these three companies, I could easily see future returns being just as bad as they have been in the past. That means that owning any of them could potentially lose you a lot of money. I'd suggest you look elsewhere for investment ideas.