Companywide shut-ins of its oil-sands operations around Fort McMurray blew a big hole in Suncor Energy's income statement for the quarter.

Pretty much nothing Suncor Energy (SU -0.92%) did as a company this past quarter mattered much to the overall bottom line. The reason is that a considerable chunk of the company's operations were shut down by the wildfires that ravaged the Fort McMurray region of Alberta. Let's take a quick look at the numbers Suncor reported and see what it did this quarter to mitigate the impact of the wildfires, as well as what we can likely expect going forward.

The one thing that really helped the company prevent an even worse loss was a strong performance from its refining and marketing segment that management attributed to a favorable refining market and a gain on an inventory re-evaluation. Here's how the company's earnings broke down by business segment. 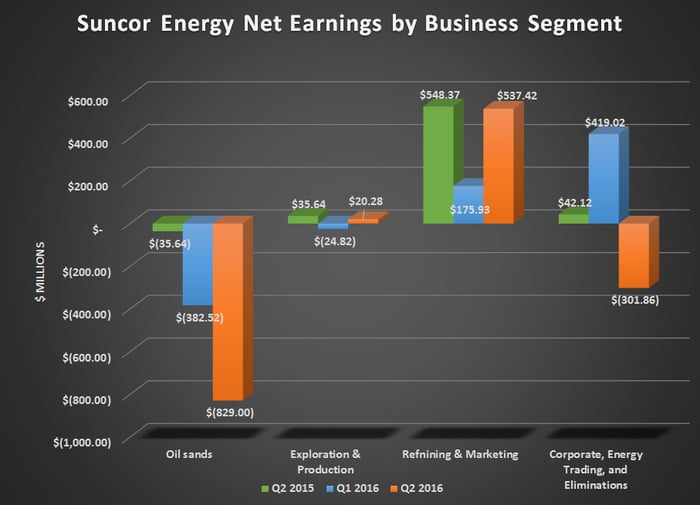 Data source: Suncor earnings releases. Chart by author. Results reported in Canadian dollars were converted to U.S. dollars based on foreign exchange rates for the given quarters provided by Suncor in the earnings releases.

We can't talk about this quarter without fully addressing the impact of the wildfires in Fort McMurray. As mentioned, the company lost a large portion of its production in the quarter. Average daily production for the second quarter was 330,600 barrels of oil per day. Compare that to the first quarter's production level of 691,000 barrels per day. Not only did the reduced output take a huge toll on earnings, but it also overshadowed the additional 5% stake in Syncrude that Suncor acquired from Murphy Oil. With the addition of Murphy's stake, Suncor now has a 53.74% stake in Syncrude's 350,000 barrels per day of production. Suncor says that all of its oil-sands operations were back up and running at normal rates by mid-July. So we are likely to see some impact from the wildfires, as well from a couple of weeks of shutdown and ramp-up time, in the third quarter.

The company also did a $2.8 billion equity raise in the quarter as a means to fund the acquisition and pay down some debt that was assumed when it acquired Canadian Oil Sands for its stake in the Syncrude project. At the end of the quarter, Suncor's debt-to-capital ratio stood at 28.3%, a number that puts it pretty much on par with many other integrated oil and gas companies at this point in the commodity cycle.

Even though the wildfires caused the company to temporarily press the pause button on construction of its Fort Hills project, the company says that it has restarted construction and still plans to bring the project to completion by the end of 2017. At the end of the quarter, the project was 60% complete. This is by far Suncor's largest capital expenditure, and it's critical that the company keeps this project on time and on budget, especially since it has upped its position in the project by acquiring part of Total's stake.

Suncor also said that its Hebron offshore project in Newfoundland and Labrador is continuing on schedule, and is expected to be producing at the end of 2017 as well.

Suncor CEO Steve Williams went out of his way to thank his employees for their efforts in getting through this challenging situation that has had more than just a business impact in the Fort McMurray region:

The forest fires in the Fort McMurray area significantly impacted the region. We shut in our Oil Sands production and focused on the safe evacuation of employees, their families and the community. I'm tremendously proud of the Suncor team. Their resilience and professionalism was readily apparent throughout our response and ensured our assets safely returned to service.

Williams also hinted that the recent Syncrude stake acquisition may not be the last one the company makes during this downcycle, and the recent share issuance is evidence that it may not be done.

Our commitment to long-term profitable growth continues to be a priority. The acquisition of an additional 5% of Syncrude is expected to return additional value to shareholders, and the equity issuance completed in the quarter will allow us to pursue further strategic growth opportunities that may arise.

It's hard to say whether Suncor had a good quarter or not as there isn't much to compare it to because of the Fort McMurray wildfires. So from an investor standpoint, it's probably better to hold off from making any snap judgments on the company's operations until we see things return to normal in the third and fourth quarters. Suncor has been one of the more ambitious companies during this industry downturn by acquiring a greater stake in Syncrude, and management is hinting that it may not be done yet. If the company does some more deals from here on out, investors should keep tabs on how the company pays for them. Although Suncor's debt levels are in OK shape today, all it would take is for the company to reach on one or two deals before the balance sheet stretches beyond what it can reasonably handle.

The Motley Fool recommends Total. We Fools may not all hold the same opinions, but we all believe that considering a diverse range of insights makes us better investors. The Motley Fool has a disclosure policy.