There's been no confirmation that a deal is in the works, but investors seem to think that the cybersecurity provider could be a target.

What: Shares of cybersecurity company FireEye (MNDT) jumped on Thursday, gaining about 10% by 3:30 p.m. EDT. There's no real news driving the stock higher, but renewed takeover speculation could be a contributing factor.

So what: FireEye has long been a potential takeover target. The cybersecurity market is expected to grow rapidly in the coming years, driven by rising cybercrime and instances of hacking. Back in June, FireEye reportedly rejected several takeover offers. The stock has tumbled over the past year, losing about 60% of its value, and making the company a more-enticing target. 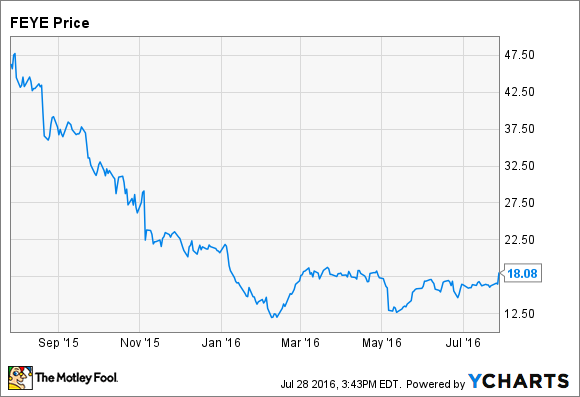 Possible acquirers include Symantec, which reportedly made an offer for FireEye in June before ultimately buying Blue Coat Systems. International Business Machines (IBM 0.21%) and Cisco Systems (CSCO 0.42%) may also be interested in the company, with both tech titans aiming to grow their respective security businesses.

IBM has labeled security one of its "strategic imperatives," and it recently launched Watson for Cyber Security, a variant of its cognitive computing system aimed at cybercrime. Cisco has made a variety of security acquisitions recently, including CloudLock, Lancope, and OpenDNS, and adding FireEye to the mix would make strategic sense. There has been no confirmation that either company has made a bid for FireEye.

Now what: Reports of takeover talks are, at this point, sparse and likely unreliable. The company has fielded offers in the past; but there's very little evidence that a deal is happening anytime soon. As always, investors should never buy a stock based solely on the hopes that the company gets acquired. FireEye could make an attractive target, but there's no guarantee that a deal will actually take place.