During the second quarter, expenses outpaced revenue growth and caused profitability to flatline.

What: On Thursday morning, rapid manufacturing service provider Proto Labs (PRLB -1.27%) reported its second-quarter earnings, which then caused its stock to fall over 17% near the market's opening before recovering a little. 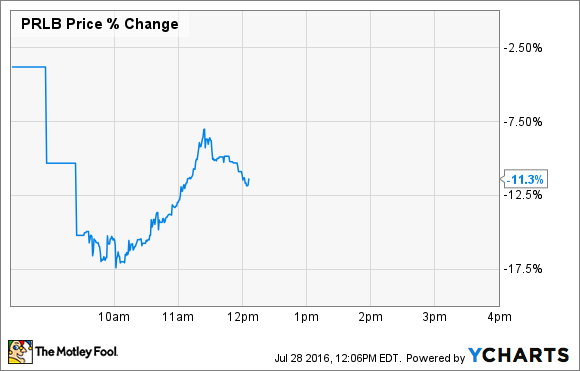 So what: In the second quarter, Proto Labs' revenue increased 17% year over year to a record $75 million. This growth translated to earning $10.7 million or $0.40 per diluted share -- unchanged from last year. Without Alphaform AG, a German-based 3D printing service provider that Proto Labs acquired in October, the company's legacy revenue grew by 10% year over year to $70.2 million.

Now what: Considering Proto Labs' operating expenses resulted in the company reporting flat profits, it's possible that investors are concerned that Proto Labs' stepped-up investments in its operations won't pay off in the form of improved profitability. Ultimately, if the company cannot rein in its expenses or increase its revenue faster than its expenses, future earnings potential comes into question.

Looking ahead, CEO Vicki Holt said that Proto Labs "will be focused on driving actions to improve our sales performance and efficiency through our operations, and we expect to see improvement in sales growth, especially in the Americas, over time." To me, this sounds a lot like Proto Labs is starting to focus on controlling its operating expenses and improving its sales performance.