What: Investors in Novocure (NASDAQ:NVCR), a commercial-stage medical-device company focused on oncology, are having a rough day. The company's stock is crashing, down more than 29% as of 4:00 p.m. EDT on heavy volume after it reported disappointing second-quarter results.

So what: The number of active patients using the company's Optune system continues to grow at impressive rates, increasing 110% during the quarter. That helped to drive total quarterly revenue up 174%, to $17.9 million. However, Wall Street was looking for even faster growth, and had expected revenue of $29.6 million.

The lower-than-hoped-for top line trickled down to the company's net income, too. Novocure recorded a net loss of $40.6 million for the period, or $0.48, which was quite a bit worse that the $0.37 loss that the pros were predicting. The disappointing sales and earnings results caused some traders to bail on the company's stock today.

Now what: Novocure has been a tough stock to own since its IPO in late 2015. Shares now have fallen more than 55%, drastically underperforming the iShares Dow Jones US Medical Device (NYSEMKT:IHI) over that time period. 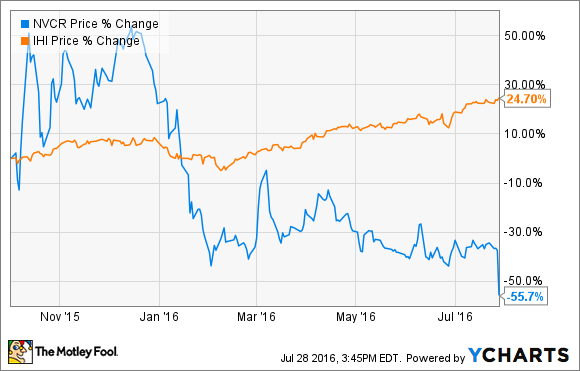 Despite the disappointing quarterly results and the horrific long-term stock performance, Novocure continues to offer up plenty of reasons to be optimistic about its future. For one, the company was able to once again expand its formulary access during the quarter, adding another 10 million patient lives to the pool. That brings the total up to 116 million in the U.S., which could go a long way toward making the system easier to access.

In addition, the FDA recently approved the company's second-generation Optune System, which is much smaller and lighter than its predecessor. Novocure is currently upgrading all patients to this new system, and has stopped manufacturing the old one, which triggered a one-time $6.4 million write-off, and was a contributor to the company's larger-than-expected loss.

Finally, the National Comprehensive Cancer Network just added the Optune System to its updated practice guidelines for newly diagnosed glioblastoma patients. The Optune's use in combination with temozolomide is now a Category 2A recommendation following standard brain radiation therapy. That recommendation could go a long way toward raising adoption, and helping to spur sales growth.

Looking a big further down the road Novocure continues to invest in clinical trials that could expand the Optune System's use into other cancers, such as lung, pancreatic, ovarian, and more.

Only time will tell if the company will be able to execute against its ambitious plan, so this company is extremely risky. Still, the Optune System could be a game changer in the way that we treat cancer, so investors with a high risk tolerance might want to keep tabs on this company's progress.