Will Nintendo’s NX help Nvidia reclaim some of the console chip market from AMD?

Nintendo's (NTDOY -0.19%) upcoming NX console could be a portable device with detachable controllers, according to Eurogamer. If the report is accurate, the NX's core device would resemble the Wii U GamePad, but function as a stand-alone handheld on the go. However, it will be possible to remove the controllers on the sides from the screen, and plug the base unit into a TV for big-screen gaming. 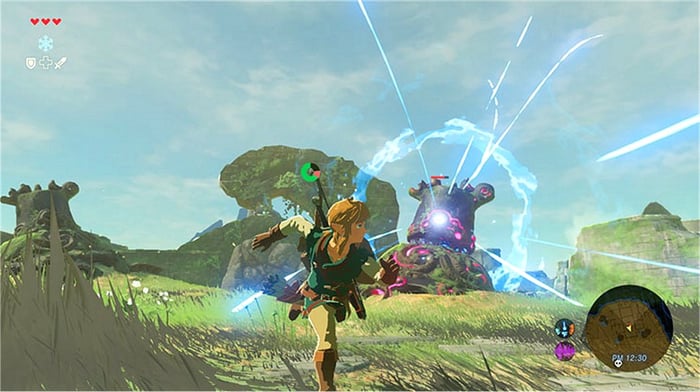 The Legend of Zelda: Breath of the Wild (for Wii U and NX) Image source: Nintendo.

The NX looks like an extension of the Wii U concept, but addresses the fact that the Wii U GamePad couldn't work as a stand-alone handheld if it wasn't in range of the console. The NX will also reportedly use game cartridges with flash memory instead of optical discs. This makes sense, since loading times are faster and the price of flash memory has declined dramatically, but the 32GB cartridges which Nintendo is recommending could be too small for many modern games.

Those revelations surprised many gamers, who had expected Nintendo to launch a beefier console to challenge Sony's (SONY -1.44%) PS4 and Microsoft's (MSFT -0.69%) Xbox One. However, the reports about the NX included a pleasant surprise for Nvidia (NVDA -2.60%) investors -- the device could be powered by its Tegra processors instead of AMD's (AMD -2.92%).

The multiple functions of Tegra

Nvidia's Tegra processors were originally designed to challenge Qualcomm in the mobile market. But when it realized that most OEMs wouldn't use Tegra chips, Nvidia pivoted the Tegra line toward Android gaming devices, set-top boxes, and infotainment and telematics systems for cars.

In recent quarters, demand from the automotive industry has been the core driver of Tegra sales, which rose 10% annually to $160 million (12% of Nvidia's top line) last quarter. Within that total, automotive chip sales rose 47% to $113 million. That growth convinced many investors that connected cars were much more important than Android consoles or set-top boxes to Tegra's future.

How Nvidia lost the console market

The last time Nvidia had a stake in the console market was with the PS3, which was powered by a proprietary GPU it co-developed with Sony. But when the eighth generation of consoles (PS4, Xbox One, Wii U) arrived, all three console makers installed AMD's hardware instead of Nvidia's.

Sony and Microsoft installed AMD APUs -- which merged CPUs and GPUs together in semi-custom system on chips (SoCs) -- in the PS4 and Xbox One. Nintendo paired an IBM PowerPC processor with an AMD GPU in the Wii U. AMD saw the shutout as a major victory for its EESC (Enterprise, Embedded, and Semi-Custom) unit, which offset its slower sales of CPUs and GPUs for PCs.

Nvidia claimed that it "let" AMD conquer the console market because the margins were too thin. AMD called Nvidia's declaration a case of "sour grapes". Since then, Nvidia's presence in gaming has been an uneven one -- early Tegra-powered Android consoles like the Ouya flopped, while its Shield handheld, tablet, and set-top boxes remain niche devices.

The upgraded PS4 (PS4 Neo) and Xbox One (Scorpio) -- which will be launched with 4K and VR games in mind -- will likely run on upgraded versions of AMD's custom APUs. This means that Nvidia's only way back into the console market is through Nintendo.

Unfortunately, Nintendo has been a laggard in the home console wars. According to industry tracking site Vgchartz, Sony has sold 42.5 million PS4s worldwide, compared to 21.8 million Xbox Ones and 13.2 million Wii Us. But if we include Nintendo's 3DS handheld in the "eighth generation", it's actually the best-selling console with 58.7 million units sold.

Nintendo is trying to leverage its strength in handhelds to straddle the handheld and home console markets with the hybrid NX. Since Nvidia basically tried the same thing with its Tegra-powered Shield tablet -- which converts into an Android "console" when hooked up to a TV and a wireless controller -- its CPU (which includes an integrated GPU) is a natural fit for the NX. Using a more power-efficient mobile processor like the Tegra is also necessary to boost the NX's battery life when used as a handheld.

But can Nintendo stage a comeback?

However, Nintendo will likely sacrifice graphical horsepower by using a Tegra instead of an AMD APU. This indicates that Nintendo is more interested in creating a "unique" device instead of competing against the PS4, Xbox One, and PC. This means that third-party developers could shun the device, as they did with the Wii U, and force Nintendo to rely mainly on first-party titles. But if the NX is a surprise hit like the original Wii, third-party developers should flock back.

Nintendo's NX might boost sales of Tegra chips when it arrives next year, but it probably won't overtake the importance of connected cars to overall Tegra sales. It probably also won't be a stepping stone back into Sony or Microsoft consoles, since AMD has the market locked down pretty tight with its high-performance APUs.