The leading independent oil and gas company reports on Tuesday after the market closes.

The oil market downturn finally caught up with Devon Energy (DVN 0.26%) last quarter. After benefiting from strong oil hedges all last year, the company's hedge portfolio ran out of gas at the end of the year, resulting in Devon feeling the market's fury. The impact of commodity prices will likely remain a major storyline in the second quarter, though it has moderated somewhat due to sharp rally in both oil and gas prices: 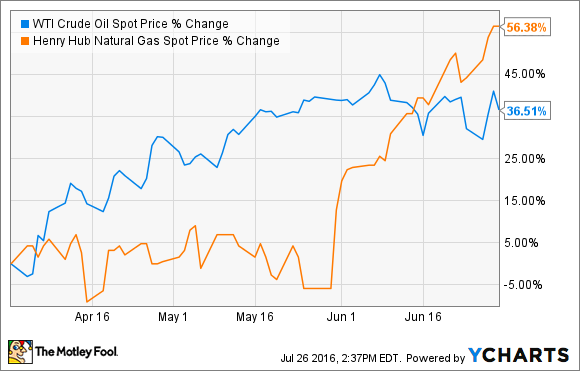 That said, with commodity price volatility still a real concern, investors should pay close attention to see how Devon is handling the situation.

Attacking its cost structure is one of the actions Devon Energy has undertaken to lessen the impact of commodity prices. Last quarter, for example, the company's cost reduction initiatives drove a 21% improvement in its lease operating expenses (LOE) which came in $6 million below its target. That led the company to lower its full-year LOE expectations by $50 million to a range of $1.75 billion to $1.85 billion.

Ideally, the company's relentless focus on costs will continue to pay dividends during the second quarter with it capturing additional cost savings. Another $50 million reduction of the top end of LOE guidance would be a clear sign that this is happening.

2. Take a look at the capital expenditures budget

Aside from cutting costs, another of Devon's goals this year was to strengthen its balance sheet through non-core assets sales. The company has already completed this goal after announcing the last of its asset sales a couple of weeks ago. Overall, it sold $3.2 billion in assets, which surpassed the top end of its $2 billion to $3 billion guidance range.

Devon already redirected $200 million of that cash to boost its capex budget to a range between $1.1 billion to $1.3 billion. However, the company said that it plans to use one-third of its asset sale proceeds for reinvestment in developing its oil and gas assets. Because of that, look to see if the company plans to add even more cash to its budget this year or if it is holding off for now given the recent drop in oil prices.

3. Check out the results of its midstream business

While Devon Energy's core oil and gas operations are beholden to commodity prices, its midstream operations through its ownership interest in EnLink Midstream Partners (NYSE: ENLK) and EnLink Midstream (ENLC 0.95%) are mostly insulated from this volatility. As a result, Devon is counting on receiving $270 million in cash distributions from EnLink this year.

That said, EnLink Midstream Partners has just enough exposure to commodity prices to cause concern. EnLink Midstream Partners needs oil to average $43.75 per barrel and gas to average $2.50 per MMBtu to produce just enough cash flow to cover its distribution with nothing left to spare. After a rough start to the year, prices have recovered, so that it appears that EnLink will generate enough cash to maintain its payout. However, because of how tight things are, look to see if Devon Energy has any concerns about its midstream business' cash flow or if EnLink hints that it might not be able to maintain its distribution going forward.

Devon Energy has had a two-part focus during the downturn: Strength its core, and reposition to resume growth. The hope is that its results in the second quarter will show progress in both areas, evidenced by falling costs, stabilization in its midstream business, and a reloaded capex budget. That would enable the company to reaccelerate growth heading into 2017, when commodity prices are expected to show further improvement.

Matt DiLallo has no position in any stocks mentioned. The Motley Fool owns shares of Devon Energy. We Fools may not all hold the same opinions, but we all believe that considering a diverse range of insights makes us better investors. The Motley Fool has a disclosure policy.