Walt Disney (DIS -3.79%) stock made historic highs above $120 per share in 2015, and it has retraced nearly 20% from those levels since then, trading at around $96 per share as of the time of this writing. The company is facing a major transformation in the TV industry, but the recent pullback in Disney stock looks like a buying opportunity to me.

Disney and the cord-cutting revolution

Many consumers around the world are leaving their cable subscriptions, or at least reducing their cable bills, to embrace digital streaming services such as Netflix (NFLX -2.25%). This is hurting companies in the traditional pay-TV business, and Disney is feeling the pressure in its media networks segment.

Based on financial reports for the first six months of fiscal 2016, the networks business accounts for 43% of Disney's revenue and 46% of operating profits, so performance in this division can have a big impact on the overall business.

It could take time and effort for Disney to adapt to the cord-cutting revolution. However, content is king in the industry, and Disney owns tons of enormously valuable and differentiated content. As long as the company keeps producing what customers want, it should be strong enough to adapt to new distribution channels such as online streaming.

Many customers are gravitating toward lighter cable packages. Disney has partnered with Sling and Sony Vue in this segment, and management said in the most recent earnings conference call that both platforms are driving incremental subscribers growth for ESPN.

While Netflix and Disney are direct competitors to some degree, they are also close partners when it comes to content creation, licensing, and distribution. In 2012 Netflix and Disney made an agreement that gives Netflix the exclusive U.S. rights for all new films from Disney, Marvel, Lucasfilm, and Pixar released in 2016 and beyond. Netflix subscribers will have access to these movies directly after they leave the theaters, and Netflix will be able to stream this content beginning in September 2016.

Disney's CEO, Bob Iger, discussed in the company's earnings conference call how streaming can be a massive opportunity for an intellectual property powerhouse such as Disney:

I don't think I will comment much about what we are doing on the SVOD --  subscription video on demand-space. This is still a very dynamic marketplace, and we continue to look for opportunities to sell our content. I will say that we have never seen a better marketplace to sell intellectual property into, and the strategy that we deployed a while ago to invest in the creation of intellectual property is one that we believe in even more today, and we are going to continue to invest more in creating intellectual property. And one of the best examples of that would be Marvel and what we have been able to do with Netflix in terms of multiple original series, renewal of second seasons on two of them, and the addition of another series from Marvel to Netflix. And the fact that Marvel has been in discussions with other distributors as well, and so demand on their product is pretty significant.

Even if the media networks division could remain under pressure over the coming quarters, chances are that Disney will successfully adapt to new technological trends in the industry over the years and decades ahead.

Besides, while the networks division is lagging, Disney is still producing rock-solid company-level financial performance on the back of vigorous growth from the parks and studio divisions. Operating income in these two segments grew 17% and 60% respectively in the first half of fiscal 2016. Disney's financial performance has been remarkably consistent over the middle term: The company has produced double-digits growth in adjusted earnings per share for 11 consecutive quarters.

The price tag looks quite attractive, too. The following chart shows valuation ratios -- namely, price to earnings, forward price to earnings, enterprise value to EBITDA, and price to operating cash flow -- over the last three years. Multiple ratios are pointing in the same direction, indicating that Disney stock is quite cheap by historical standards. 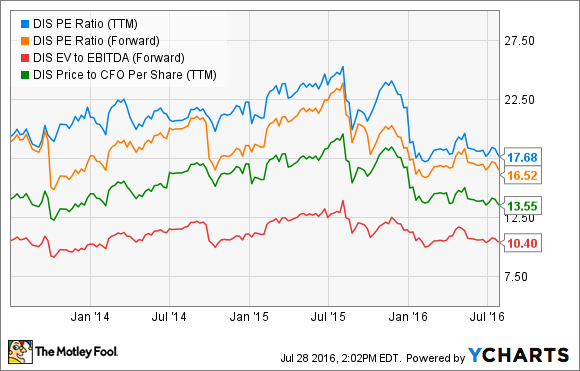 Disney is strong enough to continue thriving under the online streaming paradigm, the business is delivering solid financial performance overall, and the stock is priced at conveniently low levels. For these reasons, Disney stock looks like a compelling investment right now.