What: Crude oil quietly fell into bear market territory this week after slumping 20% from its recent high. A glut of oil and gasoline supplies in storage reignited fears that oil market fundamentals are not improving quite as fast as hoped; that weighed on the entire energy sector. Meanwhile, earnings season was in full force, which brought along with it concerning outlooks from several in the industry. 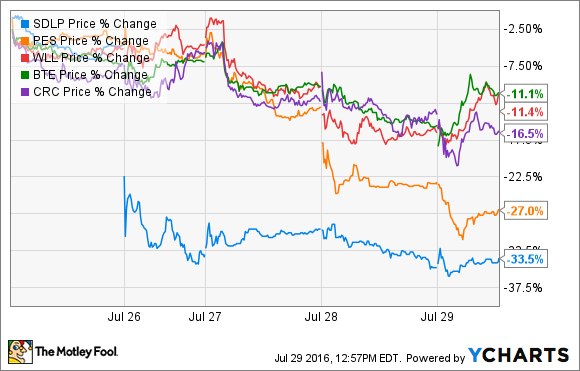 So what: Investors pummeled offshore drilling MLP Seadrill Partners after it announced its second distribution cut in the past six months. Seadrill Partners' cut pushed the payout down 60% from its recent rate and a whopping 82% lower than its peak rate. Two recent rig contract adjustments left Seadrill Partners with no choice but to reduce the payout again. That decision did not sit well with analysts at Morgan Stanley, which downgraded Seadrill Partners from overweight to equal weight.

Investors also hammered shale driller Whiting Petroleum's stock after it reported weak second-quarter results. The company lost $0.70 per share, which missed the consensus estimate by $0.25 per share. Further, the company unleashed three surprises on the market, which included the signing of another well participation agreement, the sale of a non-core asset, and the decision to boost its capital expenditures budget by 10%. It is that capex increase that's causing the most concern, with investors growing worried that Whiting Petroleum is getting ahead of itself by boosting spending when the oil market is still weak.

Onshore contract driller Pioneer Energy Services, likewise, reported poorly received second-quarter results. While the company's $0.31 per share loss was $0.01 per share better than the consensus estimate, the company's outlook was not that great. In particular, utilization in Pioneer Energy Services' drilling services segment continues to decline, slumping from 46% in the first quarter to 39% last quarter, with the company expecting it to fall to a range of 35% to 38% in the third quarter.

Canadian oil producer Baytex Energy also reported lackluster second-quarter results. Production declined by 7.6% due to the shut-in of uneconomic wells and a reduction in development spending. That production decline, along with weak oil prices, led to the company reporting a $0.41 per share loss, which was a significant drop from its breakeven results last quarter. That said, unlike Whiting Petroleum, Baytex Energy sees the weakening of oil prices as a sign to cut spending further, with it reducing its capex budget by more than 13% at the midpoint, which will cause its production to decline by another 1%.

Finally, the overall bear market in crude prices weighed on California Resources' stock this week, as its oil-fueled rally reverses. The Golden State-focused oil driller's stock had run up more than 300% from its bottom in February through early May, as a result of the more than 50% rebound in oil off its bottom. However, California Resources' stock has been cut in half over the past three months as a result of oil's bear market slump.

Now what: With crude prices sinking, the outlook for the oil sector is starting to deteriorate a bit. That is making investors nervous, causing many to sell at any sign of weakness. Already troubled companies, such as the five mentioned above, are really getting slammed: These stocks need much higher crude prices to survive long-term.