With the smartphone market weakening, this sensor company is struggling.

What: Shares of InvenSense ( INVN ), a provider of sensors for consumer electronic devices, have declined by 32% year to date as of market close on July 28, according to data provided by S&P Global Market Intelligence. A string of disappointing earnings reports, punctuated by the company's first year-over-year sales decline, are responsible for the stock's poor performance this year. 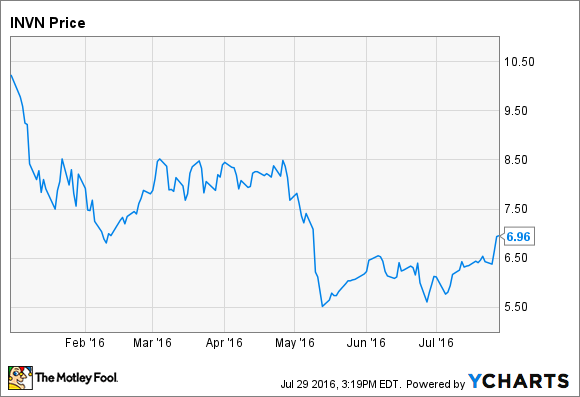 So what: InvenSense is dependent on smartphone sales, and the first ever decline in iPhone sales during Apple's fiscal second quarter did a number on the company's results. In January, while InvenSense beat analyst expectations for revenue, lackluster guidance sent the stock tumbling. That guidance wasn't quite pessimistic enough, as a 19.9% decline in revenue during the fiscal fourth quarter, which InvenSense reported in May, sent the stock lower again.

InvenSense swung to a loss during the fourth quarter, reporting an EPS loss of $0.25, down from break-even during the prior-year period. The company posted a loss for fiscal year 2016 as well, continuing the trend of deteriorating profitability that has plagued the company for the past few years.

With shares of InvenSense already beaten down this year, the company's fiscal first-quarter results, reported after the market close on July 28, didn't move the stock much despite a steep 43% year-over-year revenue decline.

Now what: While the smartphone market has turned against InvenSense, leading to big revenue declines and significant losses, CEO Behrooz Abdi sees long-term opportunity for the company. "We are successfully leveraging investments in our robust sensor platform to integrate and enable high-value, consumer-driven use cases, such as image stabilization, augmented and virtual reality, and inertial navigation, for applications spanning a number of vertical markets," Abdi said. "These are creating exciting growth opportunities that we believe play well into our focused strengths."

Shares of InvenSense are now down roughly 73% from their all-time high reached in late 2014. The company will need to continue making progress getting its sensors into other products in order to eventually turn things around.