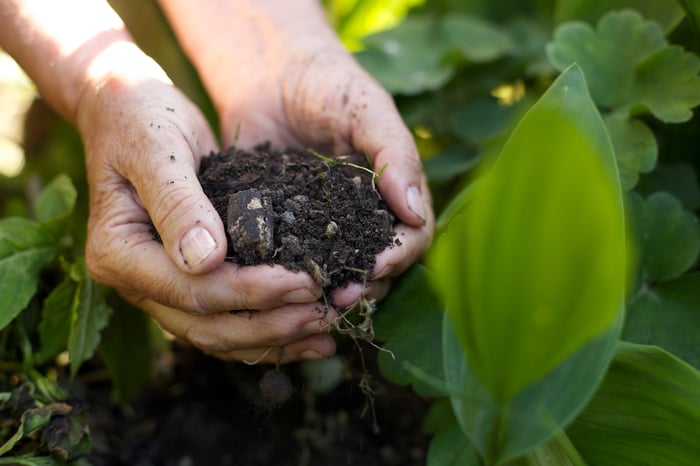 Investors in The Mosaic Company (NYSE:MOS) must be panicking after Potash Corporation's (NYSE:POT) second-quarter earnings report, which was nothing short of a disaster. PotashCorp's Q2 earnings slumped almost 70% year over year, compelling it to not only downgrade its full-year guidance but also slash its dividends. In short, the report had everything to make investors break into a sweat, and enough to raise concerns about what Mosaic might report when it releases its Q2 numbers on Aug. 2.

Given the shape of the fertilizer industry, I can almost guarantee that Mosaic's sales and profits must've tanked in the second quarter. But the important question for investors is whether Mosaic can survive the ordeal and come out a winner in the long run. That'll largely depend on how the company executes in the three key areas I'll discuss here. If Mosaic delivers on these fronts in Q2, investors might even consider a post-results drop in share prices an opportunity.

PotashCorp realized almost 40% and 12% lower average prices for potash and phosphate, respectively, during its second quarter. Mosaic's sales, undoubtedly, must've taken a hit, too, as it deals in both nutrients. In such a situation, the only saving grace can be Mosaic's capabilities to cut costs. Mosaic showed promise in Q1, when it kept its potash production costs flat but reduced its phosphate costs despite a lower operating rate. It'll be great to see the trend continue into the second quarter. On the flip side, if Mosaic announces plans to idle more plants, it'll indicate further weakness in end markets in coming months.

Investors should also keep an eye on updates about the progress of Mosaic's Esterhazy potash mine, which is touted to be the company's lowest-cost potash plant in the world once complete in 2017. If on track, it could help Mosaic lower costs substantially at a time when growth on its top line is decelerating.

While lower production costs will help, Mosaic can boost its margins only if it can cut down its operating expenses, too. During its first quarter, Mosaic not only reduced its selling, general, and administrative expenses by 10% year over year, but it also lowered its full-year SG&A guidance by $10 million at midpoint of its previous forecast range of $350 million-$370 million. More importantly, Mosaic sounded optimistic about the second half of the year and projected a combination of higher sales volumes and lower costs to drive its margins.

Here, it's worthwhile to know that Mosaic ended 2015 with strong gross and operating margins of 19% and 14%, respectively. If the company can maintain those margins this year despite the severely depressed fertilizer markets, it should affirm investors' faith in the company and its management in the long run.

I was a little worried about Mosaic's cash flow numbers in its first quarter: It generated only about $30 million in free cash flow against net income of $257 million. It's important for the company to generate enough cash flows to cover its dividends after accounting for its capital spending. Remember, tumbling profits and cash flows just compelled PotashCorp to announce its second dividend cut this year.

At the same time, investors shouldn't miss any updates about how Mosaic plans to deploy capital during these challenging times. Reuters recently reported Mosaic's interest in buying out Vale's fertilizer business. I'd consider any such move to buy cheap yet valuable assets in a down cycle as a positive one.

Put another way, every move that Mosaic takes now to lower costs, improve efficiency, and strengthen its balance sheet and position in the industry should help it ride out the storm, and that's exactly what investors should focus on when the company reports its Q2 numbers.