Ida May Fuller was born in rural Ludlow, Vermont in 1874. After graduating from high school -- future president Calvin Coolidge was a classmate -- Fuller worked as both a teacher and a legal secretary. She never married, nor had kids. In November 1939, Fuller retired.

So why is Ida May so important?

Because in late 1939, while doing errands in neighboring Rutland, Fuller stopped by the new Social Security office out of curiosity. After talking with the agents inside, she filed for benefits. And on January 31, 1940, she received a check for $22.54, the first-ever recipient of a Social Security check.

Below are five more fascinating things you probably didn't know about the most impactful social program America has ever undertaken.

Social Security is so much more important than many think

Many middle- to upper-class citizens might not realize just how important Social Security is. While the highest earners in society have often done a decent job of saving up for retirement -- or have a pension that they can count on -- most people rely heavily on Social Security for a bulk of retirement income. 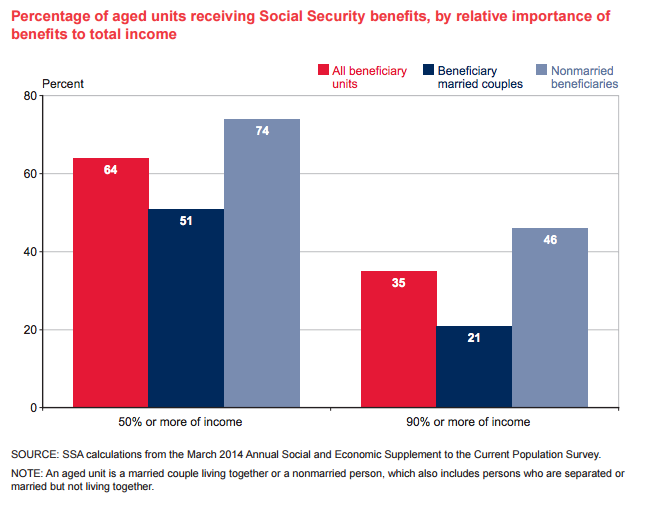 One-third of all beneficiaries count on Social Security for over 90% of income in their golden years. That stat alone tells the story.

Ida May's first paycheck -- when adjusted for inflation -- was worth $4,650 annually. She lived with her niece, and we don't know much about any other income she may have had. Needless to say, it would be tough to get by on that amount today.

Luckily for us, between 1962 and 2013, both married and non-married retired persons have seen their income increase markedly. 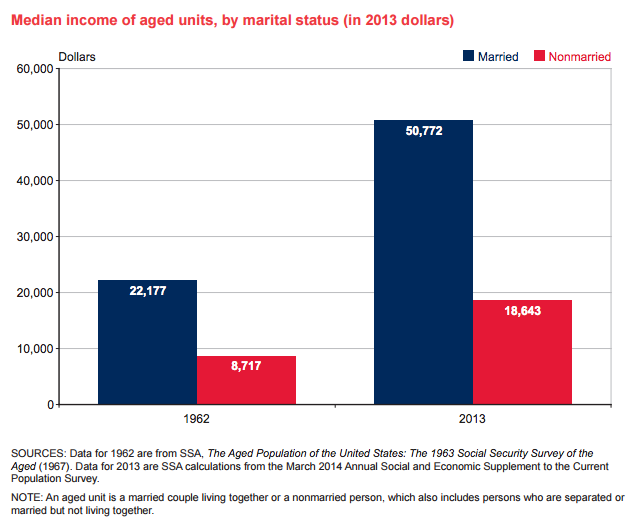 What's important to note is that this represents all income that retirees have, with Social Security contributing a part of the total pie. To put it in perspective, the average annual benefit in late 2015 was about $16,000.

But it's not just for retired workers

Many people think that Social Security is only for retired folks. That's simply not the case. 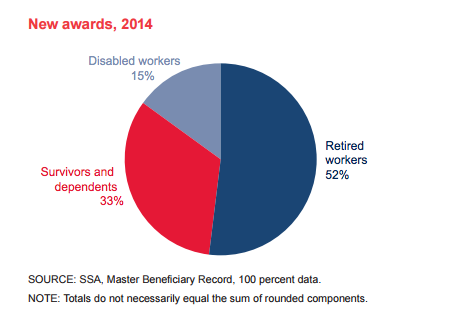 Much less appreciated is the fact that Social Security helps replace income for those that become disabled. By the end of 2014, there were 8.3 million Americans who qualified for disability income.

Also overlooked is the fact that survivors -- spouses and, sometimes, children -- receive benefits. When  added together, they accounted for one-third of new Social Security recipients in 2014.

And 20% of Social Security beneficiaries aren't even 62 years old

Officially, you can't start claiming Social Security based on your working years until you reach 62 years of age. And yet, there's a huge swath of recipients that are far below this age. 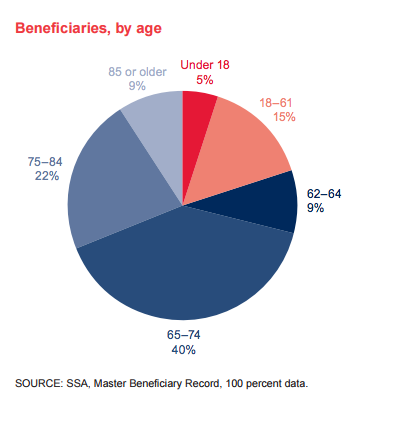 But the program is in trouble, and this chart shows why

If and when the Social Security Trust Fund runs out of money -- estimated to be roughly two decades into the future -- the program won't disappear. Even if Congress does nothing to remedy the situation, FICA taxes will still be collected from current workers and distributed to retirees.

But the program is tenuous. With so many relying on Social Security for income, the 25% cut in benefits that would occur if the current scenario plays out could be a bitter pill to swallow.

How did we find ourselves in this situation? In a word: demographics. 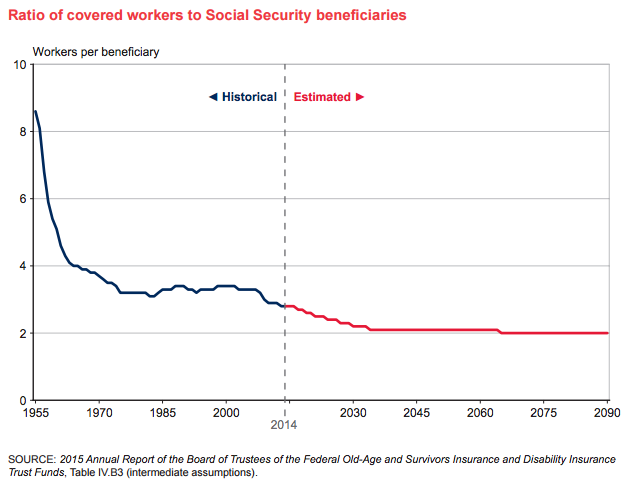 Even as recently as 1960, there were four workers contributing FICA taxes for every one beneficiary. Today, that ratio stands at 2.5, and with baby boomers about to start retiring in droves, it is expected to drop to just over 2.0 by 2030.

Without a major change in how benefits are doled out, or in how taxes are collected, such shifts will cause our monthly checks to shrink.