Tobacco company stocks have been on the rise in recent years, but don't be misled. Tobacco consumption in developed countries is in decline, and growth in emerging economies is slowing.

So why have shares advanced? Is the party over for Big Tobacco? Here's what investors need to know. 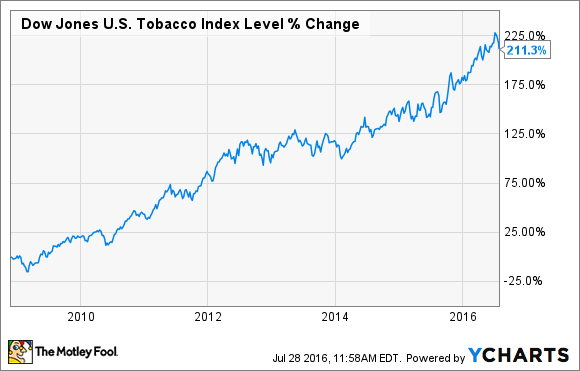 The advance of the tobacco industry as measured by the Dow Jones US Tobacco Index. Data by YCharts.

While the advancing tobacco companies can chalk gains up to a global increase in consumption, most of the gains can be attributed to rising prices. If ever there was a business that could handle price increases passed on to end users, it would be the tobacco industry. This has certainly been the case in the past decade and a half.

The trend is beginning to change, though. The fall in global consumption by about 1.5% from 2011 to 2014 was due to decreasing overall sales in developed markets such as North America and Western Europe. A combination of strict regulation and taxes, greater awareness of health risks, and higher prices have cut into sales in these markets. Developing markets, especially China and the greater Asian market, have helped offset the declines in recent years.

But growth in those markets are also starting to scale back. While cigarette prices continue to increase in developing countries, consumption fell globally by 1.8% in 2015, led by a surprise fall in sales in China. Relaxed regulations and growing populations of developing countries provided a windfall for many tobacco companies, but the picture is starting to look cloudier going forward.

That isn't to say the party's over for Big Tobacco. Developing markets still look like an attractive sandbox to play in. In the next five years, global demand is expected to inch up by only about 1%. However, global prices are expected to expand by as much as 30%, supported by improving wages for workers in developing countries.

There may be gas left in the tank for global players such as Philip Morris International (NYSE:PM) and British American Tobacco (NYSE:BTI). But what about other companies such as Altria (NYSE:MO) and Reynold's American (NYSE:RAI) that are more limited to the difficult U.S. tobacco market?

Aggressive price increases have started to lose steam, and the percentage of the population that smokes declined from 21% to 17% in the past decade. As a result, Altria and Reynolds have started diversifying away from traditional tobacco products. While the new revenue streams are still very small, both companies are looking for a solution for future growth.

Reynolds has placed bets on the electronic-cigarette industry in the hopes that smokers wanting to quit will just make a switch. A growing number of young people in the U.S. are also using e-cigs. The Food and Drug Administration reported that 16% of high-schoolers and 5% of middle schoolers were users of e-cigs in 2015. Reynolds owns VUSE, which claims 29% of the e-cig business in North America at last report.

Altria has also made a foray into e-cigs with its NuMark brand, but the company's bigger bet has been on alcohol. The company owns a slew of wineries, including Chateau Ste. Michelle, Columbia Crest, and 14 Hands. On top of the wine segment is a 27% interest in beer maker SABMiller. That company is working through a merger offer from AB InBev. If the deal goes through, Altria stands to gain $3 billion in pre-tax cash and a 10.5% stake in the new company.

An action plan for investors

Big Tobacco is struggling in developed countries, but Altria and Reynolds are busy looking for new revenue streams. Companies that sell in emerging economies may be able to ride that wave a bit longer, but if the developed world is any indication, those markets will eventually slow down as well.

Far from being a sure bet, tobacco is seeing its appeal as an investment beginning to tarnish, even when excluding moral considerations. Slowdowns in consumption growth, and even declines in some parts of the world, make the industry difficult to get excited about.

While some companies are working on new initiatives, sales from those areas are still insignificant. Reynolds doesn't even break out the numbers on its e-cig business, and there are also pending regulatory issues that cast a shadow on the industry. Meanwhile, Altria's wine segment accounted for just 2.6% of revenue last quarter.

With challenges mounting and a way forward not yet apparent, the uncertainty of tobacco's future seems more glaring than ever.