It took guts to buy shares of Intuitive Surgical (NASDAQ:ISRG) back in May of 2014. The maker of the daVinci robotic surgical system had seen its stock fall 40% in a little over one year's time.

Medical professionals were calling into question the efficacy of daVinci for benign hysterectomies, one of the company's most popular procedures; hospitals were tightening their budgets with the onset of the Affordable Care Act; and it seemed like procedure growth was coming to a screeching halt.

But the story since then has been completely different. Here it is, in three charts. 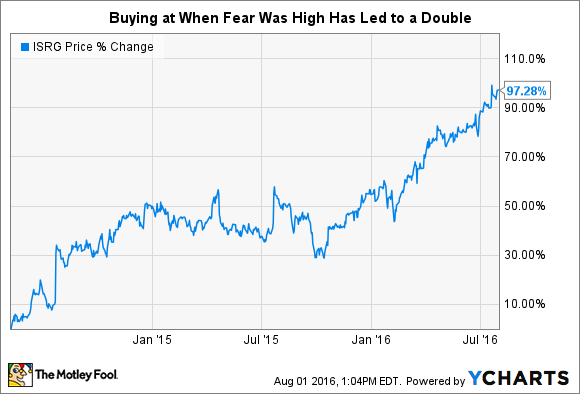 In just over two years' time, Intuitive Surgical stock has just about doubled. Part of that doubling has to do with actual results, but optimism surrounding the company has also played a role -- as measured by the multiple investors are willing to pay for it.

The point is that this is healthy growth for the stock; it is not entirely based upon exploding optimism -- an unhealthy sign that often precedes a bursting bubble.

What has caused this jump in both results and optimism?

The key driver behind Intuitive's results has been an astounding rebound of growth in the number of procedures being performed globally with the daVinci Xi system. Back in 2014, Intuitive management mentioned it had begun to notice potential in the company's General Surgery category -- primarily through interest in hernia operations.

While management has never broken out specific numbers, comments on conference calls make clear that hernia operations -- combined with colorectal procedures -- are what's causing the company's procedure count to accelerate.

Drivers of growth included U.S. general surgery, growth in the use of da Vinci surgical systems outside the United States and modest growth in U.S. urology and gynecology. Inguinal hernia repair and ventral hernia repair growth remains strong, and growth in colorectal surgery was solid.

As you can see below, this growth had been slowing heading into 2014, but ever since, it has far exceeded investor expectations.

The first quarter of 2014 represented the low point for both procedure growth and the stock. While the numbers the company posted throughout 2012 were impressive, they are unlikely to climb that high ever again -- mostly because of basic math. As the total number of procedures worldwide grows, it becomes increasingly difficult to continue growing the figure by more than 15%.

That shouldn't concern investors too much, though. The growth of procedures has led to a surprising change that could leave Intuitive with a lot of options and increased freedom moving forward.

The growth of a serious cash stash

Back at the start of 2015, Intuitive sported a cash balance (including long- and short-term investments) of $2.50 billion. In just over one year, that balance has exploded.

For those keeping track at home, that's a growth rate of 42% per year. Again, that'll be a hard growth rate to keep up moving forward. But the important thing is that it opens up options for Intuitive. Here's what Guthart had to say on the company's last conference call:

We look at the cash and think we're at an interesting point in the company's evolution here. On the one hand, I think that customer acceptance of our products has been really high [...] We have some new platforms we want to bring to the market [...] will take some investment for us to do.

Our second thought is are there M&A opportunities that, for the long term, are good for the company? [...] The third: are there other ways we can deploy capital with a long-term view for the benefit of shareholders? And that might be in buybacks or dividends or other things.

In other words, the use of the cash will be threefold:

Put these three charts together, and you have the basics of where the company stands: a rebounding stock pushed forward by higher adoption of the daVinci in surgical procedures, which is leading to a growing pile of cash that gives the company flexibility.

It's why shareholders should be optimistic about the future for Intuitive, and why I -- as a stockholder -- don't plan on selling my shares any time soon.