What: Shares of Arcos Dorados Holdings, Inc. (NYSE:ARCO) moved up 15% according to S&P Global Market Intelligence as the company completed a debt repayment and rode the post-Brexit recovery. The chart below shows the stock's path over the last month, and the rise that began on July 14 when the debt repayment was completed. 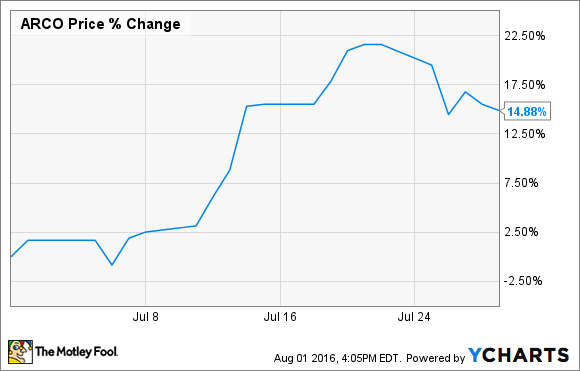 The company had secured a four-year loan in March and used the proceeds to pay off the 10.25% last month. Arcos Dorados management has spent the year shoring up its financial position by selling off restaurants to franchisees and refinancing its debt.

Now what: While shares of Arcos Dorados have more than doubled since February, the stock has been a big loser, falling more than 70% since its 2011 IPO. A recession across much of South America, including Brazil and Venezuela, and a weak Brazilian real has pressured the company over its history, but the stock has been gaining new life under a new CEO.

Though those countries still have not reached an inflection point in any economic turnaround, management's moves have helped restore confidence in the stock and its future, and analysts are expecting the company to turn a small profit this year. Considering the underlying popularity of McDonald's, Arcos Dorados should eventually find its way back to meaningful profitability. We'll learn more when the company reports second-quarter earnings on August 3.