What: Shares of WhiteWave Foods (NYSE:WWAV) spiked last month when the company received a $10 billion buyout offer from the French food giant, Danone. According to S&P Global Market Intelligence, the stock finished the month up over 18%. As you can see from the chart below, those gains came entirely on July 7, when news broke of the acquisition. 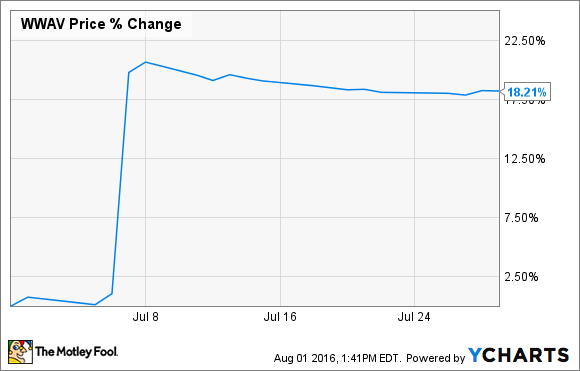 So what: The owner of the Silk soy milk and Horizon organic milk brands will receive about $10.4 billion, or $56.25 per share, from the French conglomerate in an all-cash deal. WhiteWave's brands have delivered strong growth since it was spun off by Dean Foods in 2013. WhiteWave also owns Earthbound Farms, a leader in organic produce. Danone surged 6% on the announcement, indicating approval on both sides of the deal.

Now what: CEO Gregg Engles called the deal "an exciting next chapter for WhiteWave," adding that it "delivers significant cash value for our shareholders."

The acquisition is expected to close by the end of the year and still awaits approval from WhiteWave shareholders. Analysts had initially speculated that a second offer could emerge for the prized alternative dairy business, but that has yet to occur. The stock has moved slightly downward since the announcement. With shareholders on both sides seeming to cheer the deal, I'd expect it to go through as expected unless another suitor comes forth with an even better offer.