There may not have been a hotter tech stock since the start of 2015 than e-commerce titan Amazon.com (NASDAQ:AMZN). 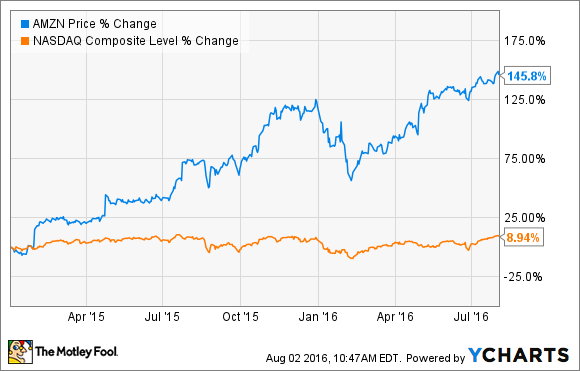 After another impressive earnings report late last month, the outlook for Amazon stock appears as bullish as ever, even as retail giant Wal-Mart (NYSE:WMT) gets serious about its own e-commerce ambitions. Case in point: Another piece of research suggests Amazon might have its most dominant second half ever just around the corner.

Another strong second half likely for Amazon

According to a recent survey published by eMarketer, Amazon will head into the all-important Q4 holiday shopping season in perhaps its strongest competitive position ever.

Additionally, the findings of a survey from cross-channel marketing firm Signal indicate that a whopping 42.7% of 1,495 U.S.-based survey respondents said they plan to use Amazon as the "primary retailer" for their holiday shopping this year.

Though so large a number might come as something of a surprise -- it certainly was to me at first glance -- this survey's findings actually closely mirror the increasingly dominant grip Amazon holds over the wider U.S. e-commerce market. Here's how the investment research of Cowen & Co. estimates Amazon Prime's growth in the U.S. has unfolded in recent years.

As should hopefully jump out, Signal's customer intent data almost perfectly aligns with Cowen's market saturation figures for Prime. For context, the holiday quarter indeed disproportionately influences Amazon's annual results. In each of the past two years, the holiday quarter has contributed roughly one-third of Amazon's total annual sales, and it certainly seems as if this year will be no different. More broadly, though, Amazon's increasingly dominant competitive positioning in the global e-commerce sector helps illustrate the virtuous cycle that large retailers such as itself and Wal-Mart enjoy -- much to their smaller competitors' chagrin.

If anything, the above research suggests that shipping subscription services like Amazon Prime and Wal-Mart ShippingPass serve as an incentive for consumers to shift as much of their retail spending as they can onto their chosen free shipping platform. This should hopefully sound obvious. However, since only a few of the largest e-commerce companies can offer such services at scale, free shipping services should increasingly serve as a competitive advantage for the likes of Amazon and Wal-Mart. This should enable both companies to capture and hold on to a disproportionate amount of global e-commerce spending in the year ahead.

Globally, e-commerce actually remains a relatively small portion of overall retail sales, though it seems few realize it. For example, 2014 projections from eMarketer estimated that e-commerce would comprise just 7.4% of total global retail sales in 2016. That offers a nearly insatiable opportunity for e-commerce operations that have already achieved scale -- namely Amazon, and increasingly Wal-Mart as well -- and are ideally poised to capitalize on this long-term global growth story.

Retail and e-commerce giants like Wal-Mart and Amazon are also best positioned to succeed in mass market retail for a few reasons. First, their scale gives them the ability to exact favorable pricing from their suppliers. However, their global distribution networks also allow them to transport massive quantities of goods to consumers' doorsteps more economically than smaller competitors.

Speaking to that same strength, Amazon is reportedly considering creating its own global supply chain service, which should help further accelerate the company's famous flywheel strategy. So while Amazon appears poised to dominate another holiday season, investors looking at Amazon need to realize that its long-term opportunity remains absolutely massive at the same time.