Frontier Communications (OTC:FTR) posted an expected loss in its second quarter, but the company has reasons to be very optimistic about its future.

The quarter ended June 30 marks the first time the company has reported results for its $10.54 billion purchase of Verizon's (NYSE:VZ) former wireline business in California, Texas, and Florida. That acquisition, which completed as the quarter was starting, more than doubled Frontier's user base, giving it 3.3 million new voice connections, 2.1 million added broadband connections, and 1.2 million new FiOS video subscribers.

CEO Dan McCarthy addressed how the new assets were being integrated in the Q2 earnings release:

We are very pleased with the performance of our newly acquired assets and our achievement of annualized cost synergies of $1 billion in the second quarter. We now expect annual cost synergies related to the acquisition of $1.25 billion, up from our original estimate of $700 million. 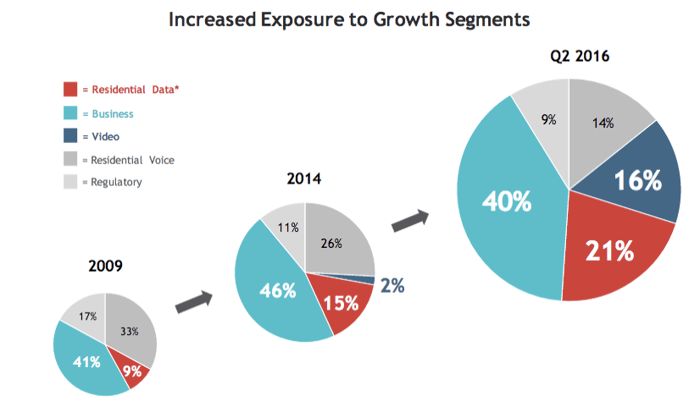 While it's hard to compare numbers for the former Verizon territories because some revenue in those markets was not part of the sale, there was one big number investors should be very excited about: Frontier raised its average monthly revenue per user (ARPU) for its residential customers from $64.43 to $83.20. That's a huge increase entirely due to the acquired customers having more bundled services.

Going forward, that stronger ARPU is something the company can build on. It's also worth noting that Q2 numbers were negatively impacted by Frontier stopping all marketing efforts in the new territories while it worked to solve customer problems related to the switchover. McCarthy thinks now that the worst is behind the company, it can get back on the right path:

As we move forward, we are continuing to focus on executing our strategy for growth, including upgrading our broadband speed capabilities, expanding our new Vantage video service to an increasing portion of our footprint, and implementing our successful commercial distribution capabilities in Frontier's new markets.

The CEO also added that the company will remain focused on increasing its video and broadband penetration while improving efficiency.

Our priorities continue to be driving strong free cash flow and continuing our disciplined capital allocation policy, which together underpin our very attractive, sustainable dividend, and industry-leading dividend payout ratio. We also are very well-positioned to achieve our plan to reduce leverage over time.

While it's too early to know if the Verizon deal will pay off, the big rise in ARPU shows that these are good customers. The problem facing Frontier -- which it has not proven it can solve -- is whether it can hold onto the users it paid billions for, and whether it can add to their numbers.

The company has moved from being a tiny player to being a small to mid-size one, but it's still competing with giants. Going forward, its challenge will be to keep up with its bigger rivals when it comes to technology, while also keeping its prices not just competitive, but lower.

Frontier has been an attractive stock because of its dividend, but at some point, spending billions ($10.54 billion, in this case) has to produce results. One quarter in, given the problems that occurred during the transition from Verizon, it's simply too early to know if the deal will ultimately pay off.

The early returns, however, are solid, with the company showing increased efficiency and at least a path to profitability. This is the first few miles of a marathon, but so far, Frontier at least remains in the race.