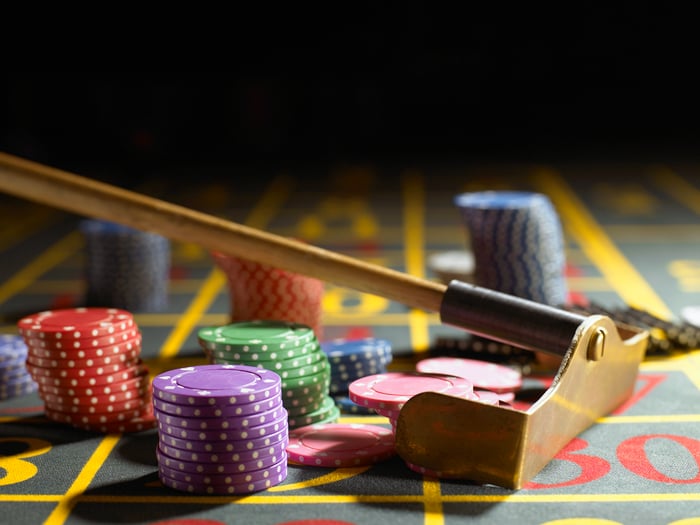 Las Vegas Sands (NYSE:LVS) stock is firing on all cylinders: Shares of the resorts and casino operator are up by almost 20% in the last year on the back of improving prospects in Macau -- a key market for Las Vegas Sands. The business is not definitively out of the woods yet, but the stock offers substantial room for gains going forward.

Things are starting to improve in Macau

Las Vegas Sands makes more than 50% of its profits from Macau, the only region in China where gambling is legal. Chinese authorities have imposed a series of restrictions on VIP gambles in Macau to combat corruption and illegal money laundering via casinos, and this is hurting gaming revenue for all casino operators in Macau since 2014.

On the other hand, things seem to be improving lately. Official statistics indicate that monthly revenue from games of fortune declined 4.5% in July, a significant improvement versus an 8.5% decline in June. Offering an optimistic view, Macau Chief Executive Fernando Chui said in a recent session of the city's legislature that government officials are forecasting an economic recovery in Macau next year because of increasing tourist traffic.

Las Vegas Sands reported a 9.3% decline in revenue during the second quarter of 2016. However, management believes demand is starting to turn around in Macau. According to CEO Sheldon Adelson during the company's most recent earnings conference call:

It's important to keep in mind that competition in Macau is increasing, since multiple gaming operators have increased their capacity in the region over the last several years. Even if overall revenue for Macau casinos starts growing again in the middle term, growing supply could be a major drawback on company-level performance. Notably, Wynn Resorts (NASDAQ:WYNN) is scheduled to inaugurate its new $4.2 billion Wynn Palace resort on August 22.

Speaking of which, shares of Wynn Resorts took a big hit last week, falling by almost 6% as the company announced that it expects to get approval for only 100 baccarat tables for Wynn Palace. Industry analysts were estimating that the company would get approval for 200 to 250 tables, so lower-than-expected approvals reduce profitability estimates for the new resort. The decision from government authorities shows that the Chinese government remains reluctant to promote the gaming industry in Macau, and this is an important uncertainty driver for companies like Wynn Resorts and Las Vegas Sands.

The main point to consider is that, even if the recovery in Macau gaming demand is here to stay, growing competitive pressure is an important risk factor to watch over the middle term. In addition, regulatory uncertainty in Macau is not going away anytime soon.

As a sign of confidence on the long-term future of the business, management has substantially raised dividends over the past several years. Dividend payments have increased at an average annual rate of over 30% per year from 2012 to 2016, growing from $1 annually per share in 2012 to $2.88 per share in 2016.

The company produced nearly $3.5 billion in operating cash flow over the last 12 months, while capital expenditures absorbed roughly $1.5 billion of that money, leaving Las Vegas Sands with nearly $2 billion in free cash flows. Dividend payments amounted to nearly $2.7 billion over that period, so free cash flow generation is currently not enough to finance dividend payments, meaning Las Vegas Sands needs to resort to debt to pay for those dividends.

Nevertheless, dividend sustainability needs to be analyzed on a forward-looking basis. Las Vegas Sands is scheduled to finish construction work at The Parisian and St. Regis resorts in the middle term, and this should free up financial resources for dividend payments in the coming years. 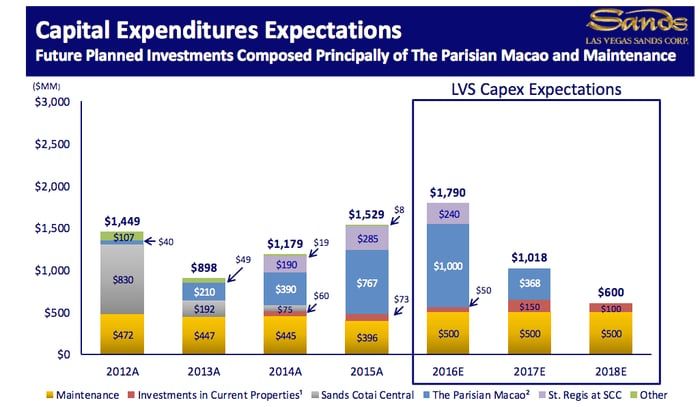 Las Vegas Sands is a risky investment proposition -- that's beyond discussion. However, the stock is paying a remarkably attractive dividend yield, and it looks like the worst could be over for the company in Macau. For investors who can handle the uncertainty, Las Vegas Sands stock looks like a smart bet with plenty of upside potential.