It seems that no matter how much change we see in the oil and gas market from quarter to quarter, earnings results from Magellan Midstream Partners (NYSE:MMP) remain remarkably steady. Even though profits from the few business segments that are exposed to commodity prices have been adversely impacted, it appears that a new project is starting up to offset the declines. This quarter was much of the same. Here's a quick snapshot of the company's results and what management has planned in the coming years.

On the operations side of the business, Magellan pretty much held steady. There were some gains on the reined product side of the business from its 4.6% raise in tariffs in the second half of 2016. There was also the added benefit of higher volumes moving through the system thanks to higher gasoline demand. For its crude oil segment, operational margin declined on slightly lower volumes and a customer buying out the remainder of its storage contract in 2015. 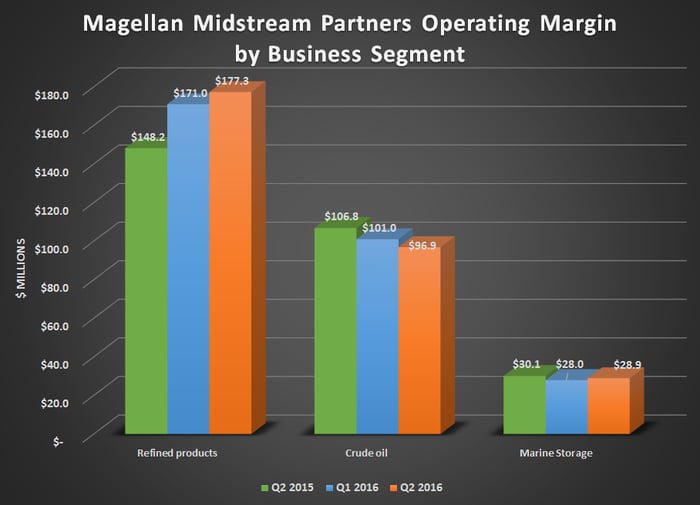 The addition of the Pasadena, Texas marine storage and export terminal is a decent sized project for Magellan, but as CEO Michael Mears stated on the call, it is just the first step in what is expected to be a much, much larger project.

The initial phase of this terminal includes approximately 1 million barrels of storage on nearly 200 acres of land and a ship dock. The capital cost for this project is expected to be $335 million and will be operational in early 2019. For this initial phase, we expect to realize about a 12x EBITDA multiple, which includes all of the upfront costs such as the land purchase and pipeline infrastructure that will benefit all future phases. If we are successful in building this facility to its maximum capability with up to 10 million barrels of storage and 5 docks, the total capital invested would be approximately $1 billion and it would generate an estimated 8x EBITDA multiple.

As you recall, we are generally targeting an 8x multiple for our projects but are willing to accept a lower return for a strategic project with significant upside potential, which is exactly what this first phase of the Pasadena marine terminal represents. We are currently in active negotiations with a number of parties to expand the new Pasadena terminal and are optimistic that we will be able to build the facility out to its full potential.

This statement right here is one of the most overlooked aspects of pipeline projects. While the company wholly acknowledges that the initial phase of the project may be a bit above its target return rate, it's also doing some of the heavy lifting to set the company up with an easily expandable asset that can generate higher returns with further development.

After another expected earnings result for Magellan in the second quarter, it appears that things are looking much better for the second half of the year. The addition of the Little Rock pipeline and the Corpus Christi condensate splitter will be a welcome addition to the company's cash flows over the next two quarters. These two projects should help alleviate the issue of lower distribution coverage ratios we have seen in the last two quarters.

One thing worth keeping track of in the upcoming quarters is the progress of the Saddlehorn pipeline and its ability to be fully functional by the end of the year and whether the company has any issues with volumes. We're still seeing oil and gas production across the US decline and some customers are cutting back on pipeline commitments. Hopefully this won't be an issue for Magellan.